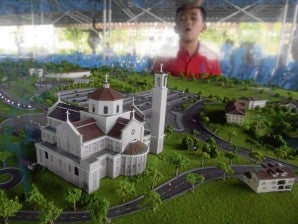 CHURCH SPRAWL A miniature scale of Montemaria where “healing priest” Fernando Suarez plans to build his own church and congregation in Alfonso, Cavite. PHOTOS BY MARIANNE BERMUDEZ

Phenomenal healing priest Fernando Suarez was amazed. It usually took six years for a new congregation to be set up, but in his case the vital elements of the process took only six days.

“I am in awe!” exclaimed Father Suarez, 44, his voice bringing out his childlike qualities—and his being Filipino.

Suarez has formed a new community named the Missionaries of Mary Mother of the Poor (MMP) under the Diocese of Occidental Mindoro after resigning from the Ottawa-based Companions of the Cross, which ordained him in 2002.

Questions have been heard from various quarters on the status of the Batangas-born priest, who now attracts 100,000 to 150,000 people monthly to his healing Masses, apart from drawing substantial donations in cash and in kind from elite families, big corporations and sociocivic groups, not to mention big foreign donors for the projects of the Foundation of Mary Mother of the Poor.

Was he expelled by his Canada group? Had things gone into his head and he could no longer be controlled by his superiors? From Canada, he based himself in Batangas while his group was in Cavite, so why was there word that he would move to Mindoro?

Breaking his silence on these issues, Suarez said: “Overwhelmed by the grace of peace after a pilgrimage to the tomb of Mother Teresa in Calcutta last February, I resigned from the Companions of the Cross on March 25, 2011. Then, on March 31, 2011, I was accepted by the Apostolic Vicariate of San Jose, Occidental Mindoro, under Bishop Antonio Palang.”

On July 16, 2011, Palang decreed the establishment of the MMP as a “Public Association of Christ’s faithful.”

The decree stated: “Aimed at living the demands of evangelical counsels, healing, renewal and ministry to the poor with the intent of becoming a society of apostolic life, the MMP is hereby formally accepted for the service of our pastoral jurisprudence.”

The poor of Elin

To grow the mission, Suarez has been assigned to Elin (pronounced Eling) on the tip of Mindoro, an island three times the size of Boracay and which remains without roads and electricity.

“The place is so poor,” he said. “But that is an answered prayer as I have requested Bishop Palang to locate the mission with the poor.”

“Some have criticized me, saying that I do whatever I want, I go wherever I want to go all over the world. Perhaps if they come with me to Elin, they may say things differently,” the priest said.

“Things are happening fast. MMP now has 10 seminarians. Three will be ordained priests this August,” he added. 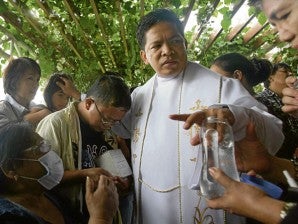 BLESSED WATER Father Suarez dips his fingers inside a bottle to bless its water during a healing Mass attended by some 50,000 people.

Suarez remembered that on the day he was ordained, a priest came to him and foretold that he was going to receive such tremendous gifts from God that his group would not be able to contain him.

“In Canada, the Companions, to which I am so attached, tried their best to accommodate me and the demands on my healing ministry. But my calling has become so evident,” he recalled.

The young Fernando Suarez was a chemical engineering degree holder from Adamson University who worked for two years with the company CocoChem. He was engaged to be married at 25, but the engagement was called off the same day it was made when his girlfriend of 12 years said, “I think you are meant to be a priest.”

He entered the seminary run by the Society of the Divine Word (SVD).

Suarez recounted that in 1995 the Blessed Mother and St. Joseph appeared to him in a dream where he was told he would go to a “cold and windy place” and would tell the world of God’s love. Three days later, a man came to him and presented him documents for travel to Winnipeg, Canada.

“There really is no barrier to all that God has planned,” the priest said, making a reference to a key message he delivered in his sermon on Saturday, Feast of the Transfiguration.

Obviously in his element at the new site of the Oratory of Our Lady of Montemaria, an MMP Foundation project situated on a breezy hillside expanse in San Alfonso, Cavite, Suarez repeatedly exhorted those present to emerge from the Mass “fully in awe of the power of God.”

“Our Lord heals you all now. He wants you to be in awe, in great amazement of His powers, because He wants you to surrender to Him all your aches, pains and troubles,” he said, drumming up his message in between folksy anecdotes of his healing experiences.

The crowd broke into laughter when he narrated that just the other day, at the Philippine Army headquarters, “napatumba ko ang mga heneral! (I knocked the generals down).”

Prayed over and brought to a state known as being “slain by the Holy Spirit,” the military officers were literally reduced to fallen generals before the power of the Lord, he said.

Suarez’s healing Masses will continue to be held on weekends at Montemaria, with permission from Bishop Palang and Bishop Chito Tagle of Cavite.

The priest glowed with anticipation over the spiritual yield of his new community, one which he said would seek a “new springtime of the Church” through the renewal of priests.

Seeing the healing ministry as a unifier of the Church, Suarez said: “There is healing when there is unity. Hatred breaks. Healing is forgiving and forgiving unites. Unity is healing.”

Read Next
Tokyo meet produced only atmospherics
EDITORS' PICK
Acer starts the year off strong with the Aspire Vero National Geographic Edition
4.7 million Filipinos have received booster shots, but that’s still a ‘low’ number – Galvez
Over 3 Million worth of prizes to be won at Smart Padala’s SENDali Manalo Promo!
‘Not yet the end’: Lawyer says Marcos Jr’s DQ cases to take lengthy process
Omicron now shows up in 90% of samples sequenced – Duque
The best of bayside and city living at SMDC’s Sail Residences
MOST READ
When to get boosters after positive COVID test
Duterte asks: ‘Is COVID-19 airborne?’ Duque blames spread on ‘token compliance’ with rules
In Batanes, octogenarian dies of COVID-19
Drug lord Espinosa tried to escape through air vent at detention facility – NBI
Don't miss out on the latest news and information.