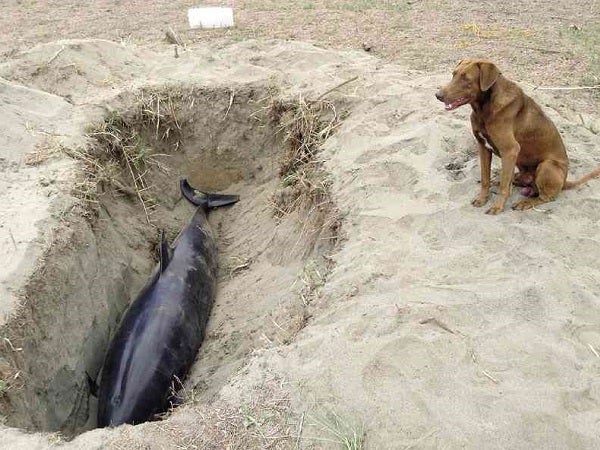 A DOG stands guard over a dead dolphin being buried in the Bureau of Fisheries and Aquatic Resources’ Fish Cemetery in Dagupan City. CONTRIBUTED PHOTO/WESTLY ROSARIO

DAGUPAN CITY—Two dolphins and a sea turtle with hack wounds were found dead in separate sections of the Lingayen beach on Friday.

The first dolphin was recovered at the beach front near the Pangasinan capitol, said Westly Rosario, chief of the National Integrated Fisheries Technology Development Center at the Ilocos office of the Bureau of Fisheries and Aquatic Resources (BFAR) here.

A female Fraser’s dolphin, which measured 2.36 m long and 1.2 m wide, was found off the Pangapisan village in Lingayen.

“It could have been dead for days as its flesh was already rotting,” Rosario said.

The turtle and the gunshot-riddled dolphin were buried in  the fish cemetery here.

Rosario said officials had to decide  whether the BFAR would preserve the other dolphin.

He said the Lingayen Gulf receive migrating sea animals like dolphins at this time of the year, but fishermen sometimes shoot the mammals because they feed on fish they try to catch. Yolanda Sotelo, Inquirer Northern Luzon