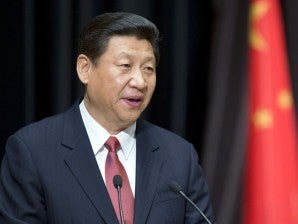 MOSCOW—China’s new leader Xi Jinping on Saturday hailed strong relations between Russia and China as a guarantee of world peace, as he continued his first foreign trip as president with a speech to students in Moscow.

“Strong Chinese-Russian relations at a high level not only answer our own interests, but serve as an important, reliable guarantee of international strategic balance and peace,” he said during a televised speech in comments that were translated into Russian.

He was speaking at the prestigious Moscow State Institute of International Relations, a day after meeting his Russian counterpart Vladimir Putin and overseeing the signing of a raft of energy and other agreements.

Once bitter foes during the Cold War, Moscow and Beijing have boosted cooperation in recent years to counterbalance US global dominance.

At the UN Security Council, China and Russia have both vetoed resolutions to impose sanctions on Syrian President Bashar al-Assad’s regime, which is locked in a bloody two-year conflict with the opposition.