Graft court trial to take place after May polls 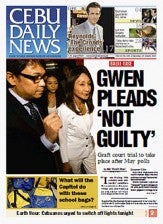 I am facing this calmly and stoically,” said Gov. Gwendolyn Garcia when she showed up yesterday at the Sandiganbayan in Quezon City.

She told reporters she wasn’t worried about the case itself but its effect “on my children and family.”

Garcia entered a plea of “not guilty” to graft charges in the 2008 purchase of the Balili beach property in Naga City, which the Ombudsma said was anomalous since most of the 24.7 hectares was underwater or classified as coastal timberland.

The criminal trial will get underway months from now after the May 13 elections, where Garcia is running for congress in Cebu’s 3rd district.

The Sandiganbayan set the preliminary conference for Garcia’s case on May 29 and 30. A pre-trial conference was scheduled on June 17 and 18.

Associate Justice Teresita Diaz-Baldos, who earlier ordered the issuance of an arrest warrant for Garcia when she failed to show up for her arraignment date on Thursday, lifted the arrest order and reinstated Garcia’s P90,000 bail bond.

Garcia, who was dressed in white slacks and a jacket, personally appeared before the Sandiganbayan’s Second Division, and stood in court while the charges were read aloud to her.

She was accompanied by her principal lawyer Tranquil Salvador III and daughter Christina Codilla-Frasco.

Garcia faces two counts of graft and one case of technical malversation of funds in relation to the alleged irregular purchase of the Balili estate for P98.9 million.

While Ombudsman officials earlier said a preventive suspension is expected to follow, upon the request of the Office of the Special Prosecutor, her lawyer disagreed.

“I don’t think another suspension will be issued against her. It would appear to be an overkill,” Salvador told Cebu Daily News.

“Requests for preventive suspension are heard. It’s not motu propio,” he said, clarifying that a hearing woud still have to be conducted on this.

Garcia is serving a six-month suspension for another case as penalty for an administrative charge of grave abuse of discretion in a decision of the Office of the President regarding her dealings with the late Vice Gov. Gregorio Sanchez Jr.

The Department of Interior and Local Government (DILG) implemented the suspension order last Dec. 19, 2012. The period will end in late May when Garcia’s final term as governor will be virtually over.

Salvador said yesterday’s arraignment allowed the governor to “reinforce Garcia’s position that she is innocent of the charges and that she is wiling to submit to the juridisction of the court” in the Balili case.

Asked about the possibilty of a preventive suspension, he said they were not worried about it.”

The Balili estate was purchased without a development plan or geodetic survey conducted.

Once touted to be the site of an international port, the fishponds and part of the foreshore land were backfilled and developed as coal ash waste pits to contain the ash produced by electric power plants of Kepco-SPC in Naga City.

The Sandiganbayan on Thursday ordered the issuance of an arrest warrant for Garcia when she didn’t appear for her scheduled arraignment.

Through her lawyer, Garcia said she was not available that day because of a a speaking engagement in a graduation ceremony at the Ginatilan Elementary School in Balamban and tow other events, the blessing of a congressional headquarters in Argao, and an assembly of barangay officials in Asturias town.

When the court denied her request to defer araignment came last March 19, it was too late to cancel the engagements, her lawyer said.

Only Garcia, Amparo and Romeo Balili, and Gingoyon were arraigned in court and entered a plea of not guily.

Bolo still has a pending motion to quash the information and to defer arraignment.

The anti-graft court earlier granted the petition of Salubre, Sususco, and Pelayre to defer arraignment. A new date was set in May.