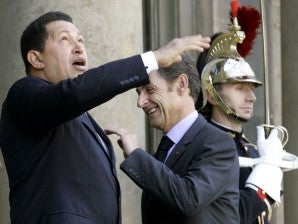 In this Oct. 26, 2008 file photo, France’s President Nicolas Sarkozy, center, and Venezuela’s President Hugo Chavez have a light moment prior to their meeting at the Elysee palace in Paris, France. Venezuela’s Vice President Nicolas Maduro announced on Tuesday, March 5, 2013 that Chavez has died. Chavez, 58, was first diagnosed with cancer in June 2011. (AP Photo/Michel Euler, File)

PARIS—A lawyer for Nicolas Sarkozy slammed an investigation into the campaign finances of former French president, saying he is being treated “scandalously.”

Thierry Herzog said Friday that Sarkozy remains “combative” but still considers that he “has been treated scandalously.”

Herzog’s comments on French radio RTL come a day after a judge filed preliminary charges against Sarkozy, formally placing him under investigation over allegations he illegally took donations from France’s richest woman on the way to his 2007 election victory.

Sarkozy is charged with “abuse of someone in an impaired state” in the case involving L’Oreal cosmetics heiress Liliane Bettencourt, who is now 90.