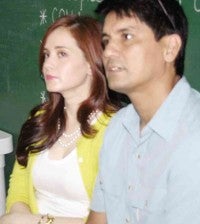 CELEBRITY COUPLE Richard and Lucy Torres Gomez. The Supreme Court decision unseating Lucy in the House of Representatives does not affect her candidacy, according to the Comelec. FILE PHOTO

TACLOBAN CITY—The Supreme Court decision unseating Lucy Torres-Gomez as legislator does not affect her candidacy, according to the Commission on Elections (Comelec).

Voting 7-4-4, the Supreme Court ousted Gomez as representative of the fourth district of Leyte, saying she was not a valid substitute for her husband, Richard Gomez, who was disqualified from running for congressman for lacking residency.

Petalcorin said the work done by Gomez when she was representing the district is considered valid.

“She is, or she was, a de facto official at that time. She was clothed with legal authority, which means she is entitled to all the salaries, benefits and emoluments,” he said.

Gomez is running in Leyte’s fourth district covering the towns of Albuera, Kananga, Palompon, Isabel, Matag-ob, Merida and the city of Ormoc, which has a voting population of more than 248,000.

Richard, an actor, is running for mayor of Ormoc. Both belong to the ruling Liberal Party.

Gomez, in a press conference in Manila on Tuesday, said she would file a motion for reconsideration on the Supreme Court decision.

But her opponent, outgoing Ormoc Mayor Eric Codilla, said the high court decision was a boost for his candidacy.

“I will not deny that it could be a plus point for me,” said Codilla in a phone interview.