Remains of Kristel Tejada to be taken to UP Manila 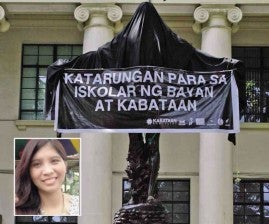 Students at the University of the Philippines in Manila cover the Oblation statue with black cloth to protest the school’s “no-late-payment” tuition policy and the death of Kristel Tejada (inset). Several senatorial candidates are calling for more state subsidy for poor students following the suicide of Tejada who could not pay her tuition. NIÑO JESUS ORBETA/FACEBOOK PHOTO

MANILA, Philippines–The body of  Kristel Tejada will be taken to the College of Arts and Sciences building at the University of the Philippines in Manila on Thursday morning where a Mass will be held at noon.

The mass will be followed by a tribute to her at 5 p.m. after which her remains will be returned to a funeral home in Sta. Cruz, Manila.

Youth groups initially wanted to transfer Tejada’s wake to the Philippine General Hospital chapel but this was not possible so UP Manila Cancellor Manuel Agulto offered the CAS building instead.

On Friday, there will be a funeral march from the CAS to Mehan Garden. The Tejadas requested everyone to wear red, their daughter’s favorite color.

In one of her talks with her program adviser, Andrea Martinez, Tejada had said that her studies were her way of coping with her worries in life.

“When I’m in school, I forget the problems at home,” Tejada had confided in her, Martinez told the Philippine Daily Inquirer.

Tejada, a 16-year-old freshman taking up behavioral sciences, killed herself last Friday after she was left with no choice but to drop out of school when she failed to pay her tuition for the second semester.