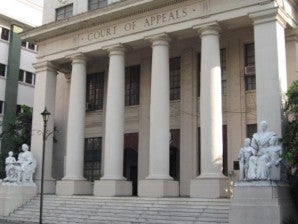 The Court of Appeals building in Ermita, Manila. CONTRIBUTED PHOTO/COURT OF APPEALS WEBSITE

MANILA, Philippines—The Court of Appeals nullified the body created to investigate the involvement of former Palawan Governor Joel Reyes in the death of broadcaster Gerry Ortega and set aside its ruling finding probable cause to charge Reyes and his brother of murder.

However, the appeals court, in its 20-page decision, said it is still up to the Department of Justice (DOJ) to determine whether Reyes and his brother Coron Mayor Mario Reyes should be charged with murder by acting on the still pending petition for review filed by Ortega’s wife Patria Gloria Inocencio Ortega.

“The Secretary of Justice should act on it and she could either modify, reverse or affirm the resolution of the first panel of prosecutors when she resolves the said petition for review,” the appeals court Special 10th Division said in its ruling dated March 19, 2013 penned by Associate Justice Angelita Gacutan.

On June 8, 2011, the first panel of prosecutors dismissed for insufficiency of evidence the murder complaint against the Reyes brothers. Patria Gloria Inocencio Ortega, wife of Gerry Ortega, sought a re-investigation of the case which was denied by the panel prompting her to file a petition for review before the Secretary of Justice.

“Needless to say, since at this precise moment this finding by the first panel of prosecutors has not yet been reversed, affirmed or modified…such finding is still valid. For all, legal intents and purposes therefore, Petitioner [Reyes] should not have been indicted for the crime of murder,” the appeals court said.

In September 2011, De Lima issued DO 710 creating a new set of panel of prosecutors to re-investigate the case against the Reyes brothers. The panel ordered the brothers to submit counter-affidavits on the murder complaint against them. On March 20, 2012, the panel eventually filed the case before the court. The Palawan Regional Trial Court then issued a warrant for their arrest.

The Reyes brothers filed separate petitions with the Court of Appeals assailing the creation of the second DOJ body and issuing a resolution charging them with murder.

“Incidentally, to this very date, the Court has not received any information or manifestation that this Petition for Review [by Ortega’s wife] has already been disposed of by Public Respondent Secretary of Justice. Hence, it is safe to assume that this case is still awaiting resolution by her office,” the appeals court added.

The appeals court said the second panel was only created to receive the additional evidence from the Ortegas. It pointed that there is nothing under DO 710 which allows them to reverse the findings of the earlier panel.