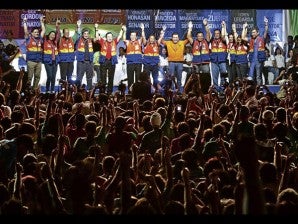 DAVAO CITY, Philippines—Singing and dancing politicians will never go out of fashion during election campaigns, but this does not mean that the aspirants for public office have nothing substantial to offer the electorate, candidates of the United Nationalist Alliance said here Tuesday.

The UNA candidates also contended that they have not resorted to personal attacks for most of the campaign season, and the almost daily word war between Juan Miguel Zubiri and Liberal Party coalition candidate Aquilino “Koko” Pimentel was an isolated matter, with Zubiri himself vowing not to rise to personal tirades in the future.

The UNA candidates made the statements amid complaints that the 2013 campaign has degenerated into the trivial and the titillating, especially when they face off with rivals in televised debates.

The 77-year-old Maceda, clad in neon green rubber shoes, has been dancing to the Korean pop hit song “Gangnam Style” in campaign rallies in the provinces.

Maceda explained that a bit of entertainment was a way for the candidates to break the tedium during rallies, especially if there are a lot of people talking about their programs or platforms.

“The people will get tired listening to nine candidates one after the other, so you really have a break every two or three speakers so that the people would not get sleepy,” he told reporters.

Zambales Rep. Milagros “Mitos” Magsaysay said a few seconds of dancing to entertain the crowd is acceptable, especially since the candidates devote most of their time to speaking about their advocacies.

UNA also wants people to know that its candidates are not the stiff upper lip types, she added. “We know how to enjoy ourselves.”

Magsaysay is also among the candidates who have been seen singing and swaying to her own jingle and to that of UNA’s.

She said UNA has been raising valid questions and issues against the administration and its senatorial bets, but the latter have not offered a substantial response.

“If I ask whether it is still ‘daang matuwid’ if they pay the bail for their allies and friends in the Sandiganbayan; is that a personal attack, is that trivial?” she said.

Zubiri, whose rivalry with Pimentel heated up when he accused the latter of beating his wife during a TV show, said he made the statements because he was fed up with Pimentel’s constant attacks calling him a cheater.

But on Tuesday, Zubiri said that was an “unfortunate” episode and he would no longer respond to personal attacks.

He also called on fellow UNA candidates as well as those from the rival coalition to stick to the issues when campaigning.

“If we are products, we should just try to be the best product, instead of spreading lies. People will get tired of that kind of political campaign,” he said.