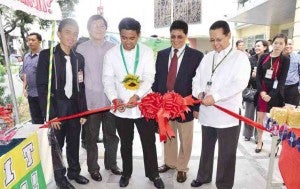 Students of the Far Eastern University (FEU) Makati campus could not have been in a better place to see if they were cut out for entrepreneurship.

For one week, FEU-Makati turned their campus, which is in the country’s central business district, into a trading and marketing place, as students attempted to convert their business ideas into money-makers.

Some 2,000 FEU undergraduate and Master in Business Administration (MBA) students joined Biz Week, an annual business and marketing fair that allows them to experience real-life problems that businesses go through, as well as the rewards for good ideas.

“We want to put theories into practice and apply what we have learned in school all year,” said Emmanuel Llego, head of Biz Week and a third year accountancy student.

Llego’s team, composed of around 20 students, was given two weeks to organize the fair, which was first held in 2011. Last year, Biz Week was canceled due to  organizational changes, as a new FEU administration took over.

“But when we revived it this year, the executive board added many new elements,”  Llego said.

Biz Week 2013 was held in late February before the final examinations. Participants  traded their uniforms for “corporate wear” and promoted their business ideas.

“Actually, the hardest part for us was raising the capital. But everything paid off when we saw how the students wanted to participate by raising funds to support their friends,” Llego said.

Biz Week started with a parade of nations along Gil Puyat Avenue and Malugay Street led by the Mr. and Ms Ambassador contenders, catching the interest of Makati’s corporate crowd. 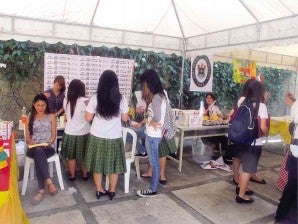 Students check out one of the booths.

“Filipinos are a festive people. It was great to see such an atmosphere in Makati,” said Biz Week executive director Ed Villacorta.

He said the competition was not a pageant but a search for business ambassadors, in keeping with the event’s goal.

Student participants represented different countries and gave business proposals related to those countries that could be done in the Philippines, Villacorta said.

Biz Week also had a stock-trading game based on the bullish and bearish movements of the Philippine Stock Exchange, an essay contest for budding business analysts, an extemporaneous speech contest for would-be marketers and a marketing plan competition. 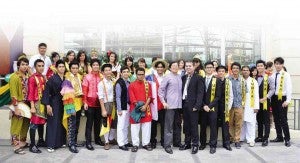 MR. AND Ms Ambassador contenders wear the native costumes of the countries they represent. They are shown here with Villacorta and program head Benedict Razon (right of center).

Students, divided into blocks,  pitched ideas, presented marketing plans and invested in their products, said Villacorta. “They had to consider the products, placements, pricing and promotions to get the right marketing mix,” he added.

Team Epiphany won second place with its fashion store, followed by the gimmick and photo booth of the Love Fondess group.

One category in the marketing contest was the creation of a campaign to promote FEU’s Makati campus.

Team Suwag, whose name is based on the popular catchword “swag,” won in the total communications campaign for the 3-year-old campus.

The second prize went to the group behind “Today’s A-Leader, Tomorrow A Leader” campaign, while Team F.E.U. was third, using the school’s acronym for the slogan “Finding the Excellence in You.”

“It’s for students and by students campaign,” said professor Leticia Gamad, head of the marketing competition that relied on the expertise of Philippine National Advertisers Association and Philippine Marketing Association to select the best proposals.