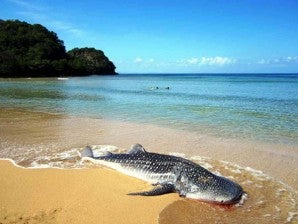 A DEAD whale shark lies on the beach of a village in Virac, Catanduanes, perplexing residents who know whale sharks are rare in the province. FERNAN GIANAN/INQUIRER SOUTHERN LUZON

VIRAC, Catanduanes—A dead baby whale shark, nearly 3.3 feet long and weighing between 200  and  250 kilograms, was found by four fishermen floating  on Maqueda Channel near this island province on Friday.

Jorge Reyes, chair of the Municipal Agriculture and Fisheries Council, in a phone interview, said he had cautioned residents against slaughtering the dead fish, locally known as “butanding,” which was found around 5 a.m.

He said Larry Tabuzo, one of the four fishermen who saw the dead fish, reported the find to village chair Gerrybel Bautista.

Juliet Araojo, officer in the provincial environment and natural resources office, said her office had advised the village council to wait for the Bureau of Fisheries and Aquatic Resources  before disposing of the whale shark.

Sightings of whale sharks are rare in waters surrounding Catanduanes although sea turtles regularly nest on some of its beaches.

In February 2012, a 10-ton whale was washed ashore in Cagdarao village in Panganiban town, facing the Pacific Ocean.