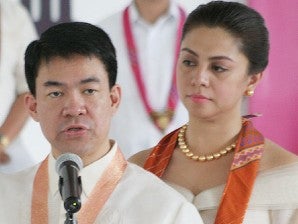 BACOLOD CITY, Philippines—The estranged wife of Senator Aquilino “Koko” Pimentel III has come to his defense in the wake of allegations that he had beaten her up.

Jewel May Lobaton on Friday denied the statement of former senator Juan Miguel Zubiri on national television that Pimentel had hit her.

“No one has the right to use our marital issues for political advancement. It is insensitive,” said Lobaton, former Bb. Pilipinas-Universe first runner up and Miss MassKara Queen 1993.

“Koko has never laid his hands on me. I have never been physically abused by him,” she added.

Pimentel and Lobaton have been living apart since November 2011, but Lobaton said they have remained very good friends. They have two sons—Martin, 8, and Akio, 3.

She added that she has been campaigning for Pimentel’s re-election. “I believe he can do a lot of good things for this country, and that he will make it in this election,” she said.

Pimentel is seeking re-election under Team PNoy while Zubiri is included on the senatorial line up of the United Nationalist Alliance.

Toward the end of the debate, Zubiri alleged that Lobaton told him that she was abused by her husband.

Her son even asked her what “bugbog (beat up)” meant. She said she had to explain to her son that his father never beat her up.

“I do not want my children to be traumatized. Lies should not be told. Koko is their father,” she said.

Lobaton recalled that in June 2012, she sought the help of a friend on how to get her children back from Pimentel who refused to give her back her sons.

“This person called his friend, Migz Zubiri, who is also my relative, if he could help me,” she said.

A meeting was arranged in July 2012 in Makati to discuss the custody of her children. Among those in the meeting were Zubiri and his wife, Audrey.

“As we were discussing it, I was crying because as a mother, at that time I was greatly affected and feeling hopeless. Being a physically battered wife therefore was not being talked about. Strategies were discussed on how to get the children from Koko,” she said.

“When the meeting ended, Migz and Audrey assured me of their support and prayers,” she said.

But a few days later, Lobaton said, she called Audrey Zubiri to inform her that her children were already with her.

“I extended my gratefulness for their prayers and she said, thank you, and that their family decided not to use my marital issues with Koko in any of Migz Zubiri’s propaganda in his senate bid in 2013,” she added.

Lobaton stressed that she and Pimentel were good friends now. He even said on national television that he wanted to save their marriage.

Speaking on ANC’s “Headstart,” Pimentel said he was trying to save his marriage and had not filed for annulment despite announcing his separation from his wife of 12 years.

Lobaton said the senator took her out to dinner recently and has been calling her more often.

She said the annullment petition she filed in the Diocese of Bacolod has not been moving. She said she would leave to God what their future would be.

But she added she was open to saving her marriage. “We have to think about what is best for our children,” she said.

“He is protecting me and I assure you, I am protecting him,” she said.