Pope Francis: Back to our roots | Inquirer News

Pope Francis: Back to our roots 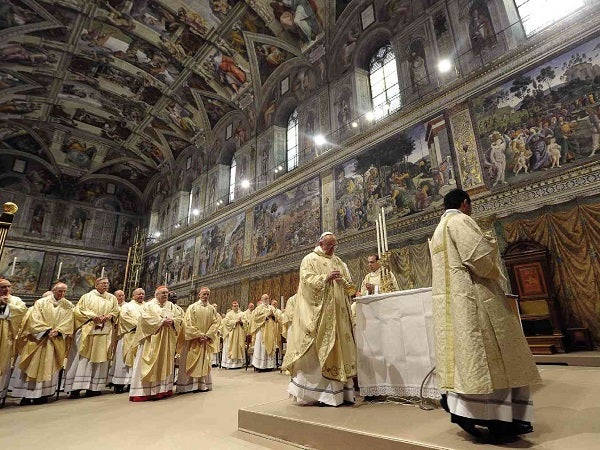 BACK TO GOSPEL ROOTS Pope Francis (center) leads a Mass at the Sistine Chapel at the Vatican on Thursday with the cardinals who made him the first Latin American leader of the Roman Catholic Church. In his message, he urged Catholics to focus on the Gospel. AFP

VATICAN CITY—In his first public Mass, Pope Francis urged the Catholic Church on Thursday to stick to its roots and shun modern temptations, warning that it would become just “a compassionate NGO” if it forgot its true mission.

The 76-year-old Argentinian Pope, addressing cardinals in the Sistine Chapel where he was elected Pontiff on Wednesday, said the Church should be more focused on the Gospels of Jesus Christ.

He warned the cardinals against “the worldliness of the devil.”

“Walking, building and confessing are not so easy. Sometimes there are tremors,” the Pope said, in a homily that will be scrutinized for clues to the style of his leadership.

The new leader of the world’s 1.2 billion Roman Catholics, who was formerly known as Cardinal Jorge Mario Bergoglio, had begun his reign by meeting people in Rome and laying a bouquet of flowers in homage to the Virgin Mary in a basilica.

The Pope also prayed at the altar of St. Ignatius of Loyola, the founder of the Jesuit order to which he belongs.

The election of the son of an Italian emigrant railway worker, who was considered a rank outsider, was met with widespread surprise and expressions of hope for change in a Church riven by scandal and internal conflict.

His elevation was also seen as recognition of the Church’s power in Latin America, which now accounts for 40 percent of the world’s Catholics, while it is in decline in Europe.

Projecting an image as a simple man of the people, the Pope chose a name himself after St. Francis of Assisi, the 13th century saint who shunned the riches of his family to devote himself to God and the poor.

It was in keeping with his image as a man who as archbishop of Buenos Aires chose to live in a modest apartment rather than the official residence and took buses to work.

Francis took the helm of the Roman Catholic Church at a time of strife and intrigue, with the Vatican rocked by a string of sex abuse scandals, by accusations of infighting within its central government and by allegations of financial wrongdoing.

“We can walk all we want, we can build many things, but if we don’t proclaim Jesus Christ, something is wrong,” he said in his first Mass on Thursday amid the splendors of the Sistine Chapel.

“We would become a compassionate NGO and not a Church which is the bride of Christ,” he said, speaking in Italian without notes.

“We must always walk in the presence of the Lord, in the light of the Lord, always trying to live in an irreprehensible way,” he said.

“We may be bishops, priests, cardinals, popes, all of this, but we are not disciples of the Lord,” he said.

He said those who build on worldly values instead of spiritual values were like children building sand castles on a beach. “Then everything comes crashing down,” he said.

His sermon was a stark contrast to that of his predecessor, Pope Benedict XVI, who read out his first homily in Latin in 2005, establishing his broad vision for the Church.

Benedict, 85, abdicated last month, saying he no longer had the strength to lead the world’s largest organization.

Francis and Benedict are to meet within days, the Vatican said.

The Vatican confirmed that Francis had part of a lung removed as a boy, but its spokesperson, the Rev. Federico Lombardi, insisted: “This is not a handicap in his life. Those who know him have always seen him in good health.”

Francis is also the first non-European Pontiff in nearly 1,300 years and the first from the Society of Jesus order, or the Jesuits, known for their work in education and promotion of social justice.

World leaders greeted his election, while the Organization for the Islamic Conference said Muslim nations hoped “the relationship between Islam and Christianity will regain its cordiality and sincere friendship” during his papacy.

The pointed message reflected a rocky relationship between the two faiths that reached a low in 2006, when Benedict sparked fury across the Muslim world with remarks seen as linking Islam with violence.

Francis is himself not without controversy.

He was only 36 when he was named to lead Argentina’s Jesuits, a job he held for six years under the country’s 1976-83 military dictatorship.

The future Pope and other Catholic clergy were lambasted by leftist critics for failing to act against Argentina’s “Dirty War” during which 30,000 people died or disappeared.

Australia’s most senior Catholic cleric spoke out on Friday on the issue of Francis’ role under the junta, saying the controversy was based on “a smear and lie.”

Sydney Archbishop George Pell, one of the men who took part in the conclave to elect the new Pope, told Australian radio that “those stories have been dismissed years and years ago.”

More recently, the new Pontiff’s opposition to gay marriage and contraception has brought him into conflict with the Argentine government of President Cristina Kirchner.

The Argentinian of Italian descent, who is the Church’s 266th Pope, faces the immediate challenges of stamping his authority on the Vatican machinery and trying to coax back worshippers who are deserting congregations across the West.

The sexual abuse of children by pedophile priests stretching back decades cast a dark shadow over this week’s conclave, which included several cardinals implicated in the scandals.

A US man who has just won a $1-million settlement for abuse at the hands of a Californian priest called for Francis to excise the “cancer” in the Church and defrock one of those cardinals, former Los Angeles Archbishop Roger Mahony, for allegedly hushing up the abuse.

Francis’ inaugural Mass will take place on Tuesday, a significant date in the Catholic calendar because it is the Feast of St. Joseph, who is patron saint of the universal church.