Board warns of more Boracay violence 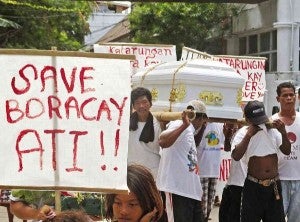 ILOILO CITY—The Aklan provincial board has warned that the killing of the spokesperson of the Ati tribe on Boracay Island could spur more violence on the popular island-resort if the crime is not solved quickly.

In a resolution passed during its regular session on March 6, the board said the killing of Dexter Condez was “an exceptional case” and a “heinous crime” that should be given proper attention.

“This murder sets an extremely terrible precedent, which can result in more violence, murders and killings over land disputes,” said the resolution, sponsored by Board Member Phoebe Clarice Cabagnot.

A lone gunman shot dead Condez, 26, on Feb. 22 as he was walking with two other tribe leaders to the Ati community in Barangay Manoc-Manoc, one of three villages in Boracay.

Condez was the spokesperson of the Boracay Ati Tribal Organization, which comprises of at least 40 Ati families or 200 tribe members on the island.

Tribe members and their supporters believe Condez was gunned down because of ongoing disputes over a 2.1-hectare beach front property that was awarded to the tribe by the government in 2011 through a certificate of ancestral domain title.

The board said in its resolution that the outcome of the murder investigation is one of the critical indicators of the security situation on the 1,032-hectare island.

Police have filed a murder case against Daniel Celestino and two other unidentified persons at the Aklan provincial prosecutor’s office.

Celestino is a security guard of the Crown Regency Boracay Resorts hotel chain, which is owned by the Cebu-based property developer J. King & Sons Co. Inc. The company is among the claimants with ownership and boundary disputes against the tribe.

Celestino and the property developer have denied involvement in the killing of Condez.

The provincial board requested the Philippine National Police for regular updates on the murder case and measures being taken to prevent killings due to land disputes in Boracay.