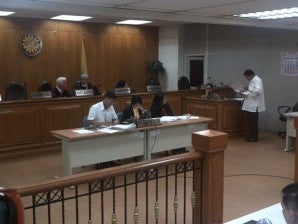 Defense counsel of Piston cross examines the witness of the law department, a member of the Comelec monitoring team that conducted ocular inspections and found illegal posters. MATIKAS SANTOS

Piston, Kabataan, and LPGMA, through their lawyers, heard witnesses presented by the Comelec’s prosecution team who testified to the placement of the illegal posters in prohibited areas.

Piston, Kabataan, and LPGMA are set to present their witnesses in the next session on Monday.

Comelec subpoenaed Kabataan, Piston, and LPGMA over the allegedly illegally posted campaign paraphernalia, which was discovered during the Comelec’s ocular inspection.

“Hearing for motu proprio cancellation of poll accreditation of Kabataan, Piston, and LPGMA set for this Friday, March 15,” Jimenez said.

Kabataan partylist was previously issued legal notices for its election propaganda found posted on the center island of Taft Avenue and tarpaulins inside the Polytechnic University of the Philippines campus in Manila.

Several other senatorial candidates and partylis groups were issued legal notices for them to take down their illegal posters.

Comelec has also been receiving reports of potential campaign violations from concerned citizens through Facebook and Twitter.

“If stripped of accreditation, Kabataan, Piston, LPGMA will no longer participate in the May 13 polls. Any votes they get will be considered stray,” Jimenez said in his tweet.