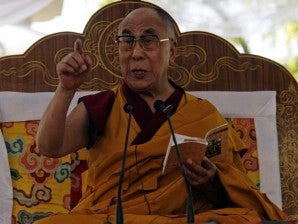 NEW DELHI—The Dalai Lama Thursday congratulated Argentinian cardinal Jorge Mario Bergoglio on his election as pope and lauded his decision to become the first pontiff ever to go by the name Francis.

The Tibetan spiritual leader, who fled to India after a failed anti-Chinese uprising in his homeland in 1959, expressed his “sense of joy” in a letter to the first ever pope from the Americas.

“May I offer you my greetings and sense of joy on your historic election as the pope,” the Nobel Peace Prize winner wrote from his northern Indian hilltop headquarters of Dharamsala.

“Although I am not very familiar with many Catholic saints, I do know about St. Francis, having visited Assisi and attended inter-religious gatherings there,” the Dalai Lama said.

“I am moved to know that his is the name you have chosen for your papacy,” he said, recalling his meetings with many predecessors of the archbishop from Buenos Aires who was elected after five rounds of voting earlier Wednesday.

Papal names down the centuries are inextricably linked to the legacies of the men who have ruled the Church.

Bergoglio’s decision to become the first pope to go by the name Francis is seen as significant as the moniker draws on the legacy of St. Francis of Assisi, the 13th-century founder of the Franciscan Order and a symbol of asceticism.