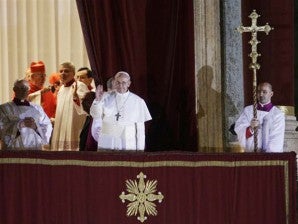 Pope Francis flanked by Monsignor Guido Marini, master of liturgical ceremonies, waves to the crowd from the central balcony of St. Peter’s Basilica at the Vatican, Wednesday, March 13, 2013. Cardinal Jorge Bergoglio, who chose the name of Francis is the 266th pontiff of the Roman Catholic Church. AP/ANDREW MEDICHINI

“St. Francis was the greatest reformer in the history of the church, Pope Francis must do the same,” the Survivors Network of Those Abused by Priests, or SNAP, said in a statement.

Jorge Bergoglio, the first pope from the Americas, chose his papal name in honor of St. Francis of Assisi, an Italian Catholic friar and preacher known for stressing humility.

US-based SNAP warned that millions of children remain at risk from pedophile priests because the Church has not yet reversed longstanding policies of covering up reports of sexual abuse by transferring priests to unsuspecting parishes.

Insisting that the Jesuit order from which he hails has a “troubled” track record on pedophilia, SNAP said that Francis “has both an enormous opportunity and duty to help prevent heinous assaults against kids by this crucial and relatively secretive segment of the Catholic clergy.”

“Very little about this crisis has been exposed in South and Central America. We worry about the safety of children in the church there,” the group added.

“For the safety of kids and the healing of victims, we hope he starts by exposing the names of predator priests — current and former, living and deceased — in his home archdiocese.”

The sex abuse scandal cast its shadow over the conclave of cardinals that elected Francis after two days of votes.

SNAP had called for more than a dozen cardinals to be excluded from the deliberations either for covering up abuses or for making tactless remarks about the scandals.

American Catholics, meanwhile, hailed Francis as a “man of the people” who has a reputation as an ascetic despite his archbishop’s robes. He rides clattering city buses, makes his own meals and is famously accessible.

But Catholics United spokesman Christopher Hale also acknowledged that when it comes to sex abuse in the Church, “apologies are not enough.”

“Priests who sexually abuse children have to end up in jail and not in our parishes,” he told AFP.

The pope’s name choice “signifies that his papacy will have a great devotion to justice, peace and to the poor,” said Eric LeCompte, executive director of Jubilee USA, a religious organization that works on financial reforms to help the poor.

“Pope Francis will preach that we need to promote access to food, water, education, employment and health care for every person, without discrimination… This pope will stand up for the rights of poor people, migrants and workers.”

Jewish communities around the world expressed hope that the new pope would foster the “close relationship” developed over the past two decades between Jews and the Catholic Church.

Before becoming pope, Francis “always had an open ear for our concerns,” said Ronald Lauder, president of the New York-based World Jewish Congress.

“I am sure that Pope Francis I will continue to be a man of dialogue, a man who is able to build bridges with other faiths.”

Lauder expressed faith that Francis “will speak out against all forms of anti-Semitism both within and without the Catholic Church, that he will take action against clerics who deny or belittle the Holocaust, and that he will strengthen the Vatican’s relationship with Israel.”

And from the third major monotheistic religion, the Council on American-Islamic Relations offered the Muslim community’s “support and cooperation.”

“We congratulate Pope Francis on his election by the College of Cardinals and offer the Muslim community’s support and cooperation in every positive effort he will undertake for peace, justice and the betterment of humanity,” said CAIR national executive director Nihad Awad.