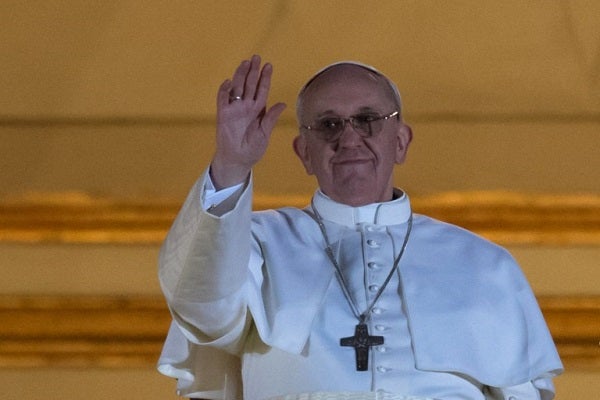 Argentina’s Jorge Bergoglio, elected Pope Francis I waves from the window of St Peter’s Basilica’s balcony after being elected the 266th pope of the Roman Catholic Church on March 13, 2013 at the Vatican. AFP/VINCENZO PINTO

BUENOS AIRES—Argentina’s Jorge Bergoglio, elected Wednesday to lead the world’s Roman Catholics, is a humble rail worker’s son who became a Jesuit priest and who is seen as true to his working-class roots.

At 76, Bergoglio—the first pope from Latin America—still enjoys a reputation as an ascetic despite his archbishop’s robes. He rides clattering city buses, makes his own meals and is famously accessible.

He lives in a small apartment rather than the archbishop’s palace that ciomes with his old job.

Bergoglio’s choice of the papal name Francis, also a first, was seen as a non-traditional choice as it honors a saint known for stressing humility.

The name is in line with his reputation, and he is seen in Argentina as ideologically mainstream, while his Society of Jesus is regarded as being among the most progressive Church institutions, especially in education.

Sergio Rubin, the religion writer for the Buenos Aires newspaper Clarin, said that, like Pope John Paul II, Bergoglio is “conservative at the level of doctrine, and progressive on social issues.”

For example, the Argentine has hit out sharply at the International Monetary Fund and at modern market capitalism.

Even so, Rubin acknowledged that Bergoglio’s rejection of liberation theology remains controversial among left-leaning Argentines.

Those who know him describe the Archbishop of Buenos Aires and primate of Argentina as a shy, softly-spoken man who shuns high society.

He was born December 17, 1936, to a rail worker who emigrated from northern Italy and a housewife.

The new pontiff went to a state-run school and studied to become a chemical technician.

When he graduated at 22, he joined the Jesuits and took a degree in philosophy. He followed this with theology studies and was ordained in 1969. He studied in Chile, and years later studied in Germany.

Many analysts said being from Latin America, having Italian family roots and having studied in Germany may have played in Bergoglio’s favor in the conservative conclave—which many had thought would choose another European.

He was only 36 when he was named to lead Argentina’s Jesuits, a job he held for six difficult years under the country’s military dictatorship.

Bergoglio battled to prevent Jesuits from joining the liberation theology movement, which drew many of the continent’s Catholic priests into political activities challenging right-wing governments.

His spokesman Guillermo Marco recalled that he issued a simple order: “Maintain the non-politicization of the Society of Jesus.”

Bergoglio’s position was in line with that of John Paul II, who after becoming pope in 1978 directed a campaign to repress liberation theology.

In the 1980s Bergoglio studied for a doctorate in Freiburg, Germany, after which he returned to become a parish priest in Cordoba.

His reputation grew among bishops after he stepped in to produce the final report of the Church’s October 2001 Synod when New York Archbishop Edward Egan was prevented from the task by the September 11 terrorist attacks.

A great student of writers Jorge Luis Borges and Fyodor Dostoyevsky, he rises at 4:30 am and is known to have little social life. Unlike most Argentines, who often dine at 11:00 pm, he goes to bed at 9:00 pm.

Some media reports published in 2005 after the papal conclave that elected Joseph Ratzinger as Benedict XVI, said Bergoglio had come in a close second behind the German.