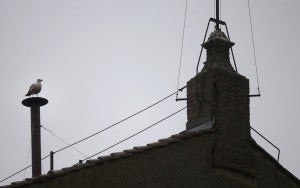 A seagull sits on the chimney on the roof of the Sistine Chapel, in St. Peter’s Square during the second day of the conclave to elect a new pope at the Vatican, Wednesday, March 13, 2013. AP PHOTO/GREGORIO BORGIA

VATICAN CITY—With no pope, a sea gull is stealing the show at the papal conclave.

Smoke watching has become bird watching in St. Peter’s Square after a sea gull perched atop the chimney that belches out smoke from the Sistine Chapel to signal whether or not a pope has been elected.

From the chapel’s tiled roof, the gull had a commanding bird’s eye view Wednesday of the sea of pilgrims eagerly waiting in the rain for papal tidings. Black smoke means no pope yet; white means “Habemus Papam”—”We have a pope!”

Dublin tourist Harry Sheeran quipped that the gull was “nearer to heaven than we are.”

Minutes after being spotted, the bird inspired a slew of Twitter accounts.