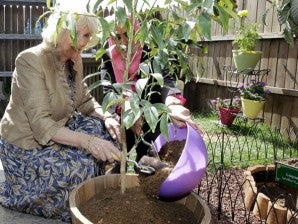 Britain’s Camilla Parker-Bowles, the Duchess of Cornwall, right, visits the Children Museum at Al-Hussein Park in Amman, Jordan, Tuesday, March 12, 2013. Prince Charles and Camilla are on a three-day official visit to the Kingdom of Jordan as part of a regional tour. (AP Photo/Khalil Mazraawi, Pool)

AMMAN—Britain’s Prince Charles and his wife Camilla on Wednesday visited a camp for Syrian refugees in northern Jordan as part of a trip to the Middle East, an official said.

The royal couple toured the United Nations-run King Abdullah Park refugee camp near the border with Syria that hosts about 1,000 Syrians who have fled the war in their country, said the Jordanian government official.

“They were briefed by UN officials on the situation (of the refugees),” the official told AFP.

Later on Wednesday, their second day in Jordan, the British prince and duchess are to visit the northern Greco-Roman city of Jerash, before leaving for Qatar, followed by Saudi Arabia and Oman.

Read Next
All eyes on Vatican chimney as world awaits new pope
EDITORS' PICK
House energy committee chair Arroyo bats for cheap electricity
Bongbong Marcos to slain journalist’s kin: ‘We are ready to help’
Score lots of freebies and discounts on vivo 10.10. Sale
Smart awards ‘Subscribe & Get Lucky’ Raffle Promo winners
10,000 to less than 500: How people are driving the tamaraw to extinction
Marcos wants to accelerate efforts to build agricultural sector back
MOST READ
34 people killed in mass shooting at daycare center in Thailand
Marcos admin gets high approval ratings in Pulse Asia survey
Marcos Jr. wants next press secretary to be journalist or media practitioner
Bongbong Marcos reappoints Uy as DICT chief
Don't miss out on the latest news and information.