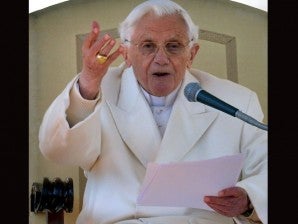 The “Pope Emeritus” is keeping his name rather than reverting back to his baptism name of Joseph Ratzinger. AFP FILE PHOTO

VATICAN CITY—From Pius to Clement, Hilarius to Simplicius, papal names from down the centuries are inextricably linked to the brilliant or wretched legacies of the men who have ruled the Vatican.

Cardinals gathered in a secret conclave to elect a new pope to head up the world’s 1.2 billion Catholics following the shock resignation of Benedict XVI will already be mulling the name they would choose if they are picked.

Very little time passes between their election, acceptance of the role and appearance on a balcony high above St. Peter’s Square, where they announce their new title.

With so much weight placed on the significance of the papal moniker, they have to choose wisely.

The tradition of choosing a new name dates back to the sixth century, when an ordinary priest — Mercurius — was elected but felt he could not keep his pagan name so swapped it for John, arguing that if Christ had renamed Simon, the first pope, as Peter, other popes could do the same.

Since then only one, Adrian VI in the 16th century, has kept his baptism name.

While some names are associated with peace or theological brilliance, others have more controversial connotations.

There has not been any pope called Celestine since the name was taken by a hermit in 1294, who was elected against his wishes and resigned the post after five months. He was immortalized by the Italian poet Dante, who placed him in Hell for his “great refusal”.

Benedict XVI’s resignation may have changed the perception of the term “job for life”, but plumping for Benedict XVII or Celestine VI might suggest another resignation is in the pipeline.

The “Pope Emeritus”, who keeps his name rather than reverting back to his baptism name of Joseph Ratzinger, had told crowds on St. Peter’s Square at the moment of his election in 2005 that he wanted to emulate the papacy of Benedict XV, who reigned during World War I.

“He was a true and courageous prophet of peace who struggled strenuously and bravely, first to avoid the drama of war and then to limit its terrible consequences,” the then pope said.

While popes in the first few centuries were called anything from Zachary to Adeodatus or Victor, from the 16th century onwards the same names have been circulating — Clement, Gregory, Pius, Paul, Benedict — and it is likely to be one of those, or a composite name.

John Paul I was the first in 1978 to bring two papal names together, to honor those who led the Roman Catholic Church during the Second Vatican Council, and John Paul II upheld the tribute when his predecessor died after just 33 days.

Those aspiring to a charismatic leadership to reconnect with the faithful after Benedict’s somewhat staid rule, might call themselves John Paul III — or even just John, after “Good Pope John” XXIII, who called the Second Vatican Council and declared it his mission to open the Church up to the world.

While the name Pius might appear at first to have the right connotations, the last pope to go by it, Pius XII, was nicknamed “Hitler’s Pope” by his detractors because of what they said was his silence during the Holocaust.

One of the most bizarre popes of all time was ninth-century Stephen VII, who despised his predecessor Formosus so much that he had his rotting body dug up, dressed in papal robes and put on trial for occupying the papacy illegally.

Formosus was found guilty, the fingers he used to give blessings were chopped off and his body tossed in the Tiber — an ungracious end which makes it unlikely that anyone will choose the name Formosus II, whether or not the trial was fair.

According to Irish bookmakers Paddy Power, the best odds are that the new pope will call himself Leo — which means lion — while the fifth best odds are for Peter.

It will be a brave man, however, who names himself Peter II.

The name is considered off limits out of respect for the Church’s first pope and, according to a prophecy attributed to a 12th-century saint, the next Peter’s pontificate will bring the destruction of Rome and kick off the Apocalypse.