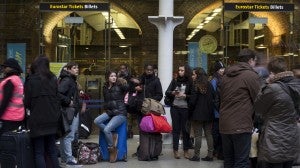 Passengers for the Eurostar service queue to rebook tickets as all Eurostar services to Europe from London were canceled because severe weather in northern France and Belgium forced operators to close sections of the railway, at the Eurostar terminal in London’s St Pancras railway station, Tuesday, March 12, 2013. AP PHOTO/ALASTAIR GRANT

PARIS—A heavy late-winter snowstorm battered northwestern Europe on Tuesday, causing widespread travel chaos with the cancellation of hundreds of flights at main airports and the suspension of train services including Eurostar.

The unseasonable snowfall—coming only eight days before the official start of spring—also knocked out power to thousands of people in France and left hundreds of motorists stranded in their cars.

France was the worst affected but Germany, Britain, Belgium and the Netherlands also reported major disruptions.

Frankfurt Airport, Europe’s third-busiest hub, had reopened two runways by late Tuesday after being briefly forced to completely close due to the heavy snow.

An airport spokesman said 700 flights had been canceled out of a scheduled daily total of 1,250 and warned of more cancellations and delays on Wednesday.

Paris’s two main airports, Charles de Gaulle and Orly, said they had canceled up to a quarter of flights and the nearby Beauvais airport, serving mainly low-cost airlines, canceled all flights.

The Eurostar train between London and Paris, the Thalys line between Paris and Brussels and all other high-speed train lines in northern France were suspended Tuesday.

In statements on their websites, Eurostar said it would “operate an amended timetable” on Wednesday, while Thalys said travelers should expect “disturbances.”

Two northern French regions, Calvados and Manche, were under a “red alert” urging residents to stay indoors—the first time such an alert was activated because of snow.

Weather service Meteo France described the snowfall as “remarkable for the season” and warned that alerts would probably remain in place until at least Wednesday.

More than 2,000 people were stranded in their cars overnight as heavy snow paralyzed roads in Normandy and Brittany, with many spending the night in emergency shelters.

About 80,000 homes in the north and northwest of France were without power, following snowfalls of up to 30 centimetres (12 inches) and winds creating metre-high snowdrifts. Schools in some northern regions were closed.

A traffic accident near Lille injured 14 people and a 58-year-old homeless man was found dead, presumably from the cold, outside a building in the town of Saint-Brieuc in Brittany.

‘Not a bad place to be stuck’

At London’s St. Pancras International train station, hundreds of passengers queued in weary resignation to change their tickets after seeing the day’s trains canceled, hopeful but far from guaranteed of a seat on a Wednesday service.

Francoise Rolland, 65, had to return to family she was staying with in Oxford after her train to Paris was canceled—her first time using the Eurostar, and her first visit to Britain.

“We don’t know if we can go home tomorrow. It’s annoying, but what can you do? We are not going to swim across the Channel.”

Another stranded passenger, 28-year-old Tom Moens of Belgium, said he was concerned about missing work but conceded things could be worse.

“It’s not their fault, Of course we want to go home, but (London) is not a bad place to be stuck,” he said.

Hundreds of people around Britain were also stuck in their cars overnight, some for more than 10 hours as ice, snow and freezing winds descended on southeastern England.

Police, rescue services, snow ploughs and gritting lorries battled to help the motorists in temperatures as low as minus 3 degrees Celsius (26 degrees Fahrenheit), with some areas under 10 centimeters (four inches) of snow.

Singer Cheryl Baker, formerly of the band Bucks Fizz which won the 1981 Eurovision with the song “Making Your Mind Up,” was among those caught up in the chaos as she tried to reach Brighton to pick up her children.

“We (took) 10 hours to do a one-hour journey,” she told ITV. “The traffic and the weather have just been atrocious and none of the roads had been gritted.”

Public transport in Berlin was affected with several regional trains canceled or severely delayed. There were also a spate of crashes on icy German roads with several people seriously hurt and one death, according to police.

A mass pile-up in the western German state of Hesse involving at least 100 vehicles injured several dozen. The crash was apparently caused by heavy snowfall and icy roads.

In Belgium, the snowstorms caused massive traffic disruptions, with vehicles backed up on 1,600 kilometers (1,000 miles) of freeways Tuesday morning due to snowdrifts and ice.