In Cordillera, resilience vs piracy 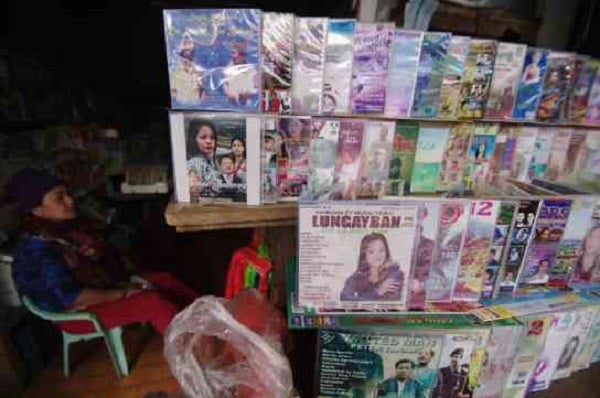 Sometime in the 1990s, Elsie Gawidan Maliones was peddling at her stall cassette tapes of originally recorded songs by Kankanaey and Ibaloy singers from Benguet.

To Maliones’ surprise, the same copies of the songs she was selling were the same ones being displayed, sampled and sold at a nearby stall at Hilltop (part of Baguio’s public market) but the songs were in compact discs (CDs). She found out that these were pirated bootleg versions, and they were being sold cheap.

Maliones owns Abatan Records, a local company she established in the 1970s when recorded songs were played in phonographs and later in cassette players. Through the company, she would accompany to a Metro Manila recording studio talented local singers, whose songs had proven to be top hits, at least among Cordillerans.

“I pitied my mother-in-law so I later helped her to keep abreast with the latest trends in music recording,” says Marcons Dayaoen, Maliones’ son-in-law.

Dayaoen soon took over the management of Abatan Records, which invested on its own recording studio lately.

From just audio-recording songs and reproducing these in CDs and later digital video discs (DVDs), Dayaoen embarked on MTV production, which also clicked.

For one thing, fans of local singers would get excited to see their idols performing against a backdrop of local scenes such as rice terraces, traditional feasts and rugged mountain roads.

But again, the biggest challenge for Dayaoen and other colleagues in the industry is piracy. Barely a week after an MTV release, they would see their original items reproduced and sold on the streets and sidewalks at almost give-away prices. 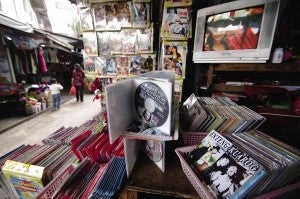 A COPY of the popular Cordillera movie, “The Adventure of Badong and Kuarog,” is displayed among foreign and local movies in DVD format at the Baguio public market. RICHARD BALONGLONG/INQUIRER NORTHERN LUZON

The suggested retail price of an MTV piece from Dayaoen’s company is P150, but the pirated version sells at P30.

Amid the rampant piracy, Dayaoen keeps on producing. “We just keep on improving the quality of what we produce,” he says.

Most of the MTV pieces Dayaoen’s company produces are in Kankanaey or Ibaloy, but they have adopted the tunes of American country or country-folk songs. The lyrics are not even the translations of the original songs.

“These are what sell better,” says Dayaoen. And he discovered that trade fairs could help market original MTV releases.

So Dayaoen keeps tab of yearly events such as the Baguio Flower Festival in February, the Strawberry Festival in La Trinidad, Benguet, in March and the Adivay Festival of Benguet in November. “These are the only opportune time when we can earn a little,” he says.

Just as Igorot MTVs started to become in vogue in the 1990s, a new development was shaping up, which inspired MTV producers like Dayaoen to also dabble in filmmaking.

It all started when Samuel Dangpa, a native of Loo, Buguias in Benguet, came out with a 30-minute video-documentary of the aftermath of an intensity 7.7-magnitude earthquake, which devastated Baguio and other parts of northern Luzon on July 16, 1990.

He entered his work in a contest sponsored by Coca-Cola Bottlers Philippines Inc. and won the top prize of P15,000 in 1993.

Dangpa, better known as “Samiklad,” had worked for Don Leonard, an American preacher and Bible producer, who was connected with the Summer Institute of Linguistics. Dangpa’s main task was translating the Bible into the vernacular.

After winning the top prize, Dangpa, a college dropout and father of four, seriously pursued filmmaking.

Two of his films produced in 2004—“Din Sungbat” (The Answer), about a philandering husband, and “Sabong Di Kada” (Flower of the Mountain), about a woman who wanted wealth—are the most sought-after among local viewers.

Dangpa, in no time, established the Vernaculary Video Ministry or VVM, a Filipino Christian organization that shows videos provided by Christian sponsors in the United States.

VVM has produced more than a dozen original films in five minority languages in Luzon and Mindanao. VVM has also dubbed films (based on the Genesis and the gospel of Luke) into over 40 Filipino languages.

Dayaoen soon followed in the footsteps of Dangpa. But if Dangpa’s works were Christian gospel-inspired dramas, Dayaoen focused on comedies.

Using a video camera, Dayaoen began filming a series of comedy flicks, entitled “Haay Biag” (What a Life), based on familiar local jokes in which dialogues are delivered in crooked local accents for effects.

The comedy series also clicked and since 2006, Dayaoen has sold at least 10,000 copies. Although these series have been pirated, he says the original copies continue to sell until now.

“I discovered that our kakailian (fellow upland folk) love stuff that can give them a good laugh,” says Dayaoen.

The latest film Dayaoen produced last year was “The Adventure of Badong and Kuarog,” which was actually part of a comedy series. This film tells about the search of Badong—one of the village’s aging and anxious bachelors (“makas-asawa”)—for a wife.

Badong’s search turned into a misadventure when his friend, Kuarog, helped him look for a girlfriend in some forsaken mountain village.

These kinds of film, says Dayaoen, are also patronized by returning overseas workers. But some overseas workers also copy his films and resell these to other Filipinos at a much lower price.

Still, he is not discouraged. “We just keep on producing and even improving the quality of what we make,” says Dayaoen, whose outlets include stalls near a bus station and pit stops along the Halsema Highway, a major link to interior Cordillera.