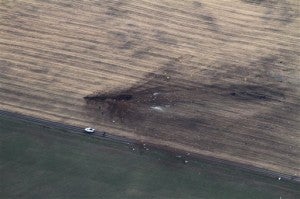 The E/A-6B Prowler was reported to have crashed at about 8:45 a.m. local time Monday, Whidbey Island officials said.

The Navy informed Congress that the wingman of the crashed plane reported that no parachutes were deployed.

“First responders are on the scene and have reported finding partial remains of the mishap aircrew,” the Navy told Congress. “All three onboard are presumed dead.”

The identities of the crew were not immediately available.

The Prowler was “engaged in a low-level navigation training mission,” the Navy told Congress. Whidbey Island officials said the cause of the accident was under investigation.

NAS Whidbey Island is home to the U.S. Navy’s tactical electronic warfare squadrons. Crews from the base, located on Puget Sound, regularly fly across Eastern Washington for training exercises.

The crash occurred in a rural area in the eastern part of the state. Aerial views of the crash site showed a large crater in a farm field, surrounded by blackened vegetation. Much of the plane appeared to have disintegrated on impact.

“You could see smoke and bits of plane in the middle of the field,” local resident HaLee Walter told KREM-TV after visiting the crash site.

The Prowler specializes in electronic warfare such as jamming enemy radar and intercepting radio transmissions. It can also be equipped with missiles.