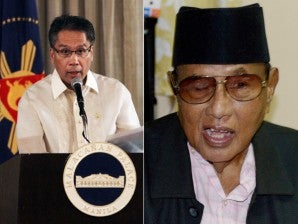 MANILA, Philippines–After weeks of bitter exchanges, the government and the sultanate of Sulu sat down Monday to discuss the “disengagement” of the armed followers of Sultan Jamalul Kiram III from Sabah.

It was the first official meeting between representatives of the government and the sultanate since a standoff between Malaysian security forces and an armed group led by Jamalul’s brother Agbimuddin Kiram started in Tanduao village in Lahad Datu town in Sabah on Feb. 12.

“Our meeting is only to find ways and means to resolve our problem in Sabah,” Esmail told reporters after the two-hour meeting.

Esmail declined to provide details of the meeting, but maintained he informed his older brother on Sunday that he would speak with the interior secretary.

“We are satisfied with what we have discussed (with Roxas), but we will have to wait for the message of President (Aquino) after Secretary Roxas informs him about our meeting,” Esmail said.

When asked what he discussed with Esmail, Roxas said: “Let’s just say it’s about disengagement.”

Asked to elaborate, the Interior secretary noted that the Malaysian government had publicly announced it would not order a ceasefire if the sultanate’s followers do not surrender their firearms.

“They (Kirams) were asking about the process and mechanisms. That’s one of their concerns,” he said.

Told if disengagement was tantamount to surrender, he replied: “We should not use strong words in times like this. It would be better for us to just wait for answers as we convey their questions (to the President).”

Roxas, who called the Kirams hard-headed (“matigas ang ulo”) in a radio interview some time last week, said it was actually a follow-up meeting with the sultanate after he met with representatives of the clan in Zamboanga City last week.

He said he agreed to speak with the Kirams when they sought an audience with him over the weekend. But he said he asked Esmail to ensure that he had the permission of “their leader, Jamalul” before Roxas agreed to meet with him.

“We don’t like to get different messages. So they assured me that (the meeting) had the blessings (of Jamalul),” Roxas said.

Apparently playing down insinuations that the Aquino administration mishandled the Sabah crisis, he pointed out that government representatives had been constantly talking with the Kirams.

Said Roxas: “Any kind of talk is better than no talk. So the talks is continuing. I deny that there were no discussions held. There were talks which happened in different levels since (the Sabah crisis) started.”