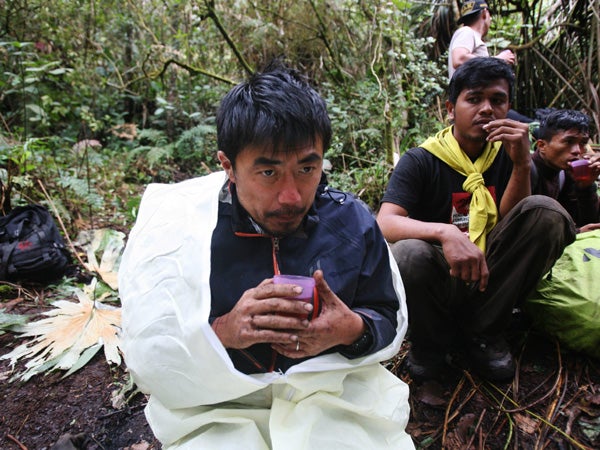 Japanese mountaineer Kosei Yamada, center, who was reported missing on Wednesday last week, has a cup of warm drink after he was found at the bottom of a ravine at Mount Sibayak, in Karo, North Sumatra, Indonesia, Sunday, March 10, 2013. Yamada was found alive near the top of the 2,212 meter (7,257 ft) active volcano. AP/Binsar Bakkara

MEDAN, Indonesia – Rescuers said they have safely evacuated a Japanese hiker who went missing for four days after climbing a dormant volcano in Indonesia’s Sumatra island.

Dianta Bangun, who headed the search-and-rescue operation, said Monday that 39-year-old Kosei Yamada was found late Saturday in a ravine where he fell from a cliff after losing his footing on what should have been a day hike. Heavy fog, darkness and bad weather hampered the rescue efforts.

Bangun said rescuers transported the hiker from the rugged, forested terrain late Sunday and rushed him to a hospital in Medan for treatment of minor injuries.

Mount Sibayak is one of about 130 volcanoes in Indonesia. Its last major eruption was in 1881, but its geothermal activity remains high.