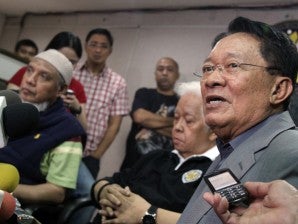 MANILA, Philippines –Former ambassador and Lanao del Norte Representative Macabangkit Lanto on Monday rejected his appointment as commissioner of the the Commission on Elections (Comelec) due to a 20-year-old electoral fraud case filed  against  him.

“With deep regret, I respectfully decline my appointment as a member of the Comelec,” Lanto said in his letter addressed to President Benigno  Aquino III dated March 9.

“After a thorough consultation with my family, I have arrived at this decision, owing in large part to the controversy that surrounded my appointment,” he said.

The letter was set to be delivered to Malacañang this morning.

Malacañang has earlier said it would review Lanto’s appointment after learning that the Lanao del Norte lawmaker was unseated back in 1994 for alleged poll fraud.

Although he reiterated in his letter that he did not commit electoral fraud, Lanto said that the “incessant media focus” on his House of Representatives Electoral Tribunal (HRET) case in 1992 made the past few days difficult for him and his family.

“The case overshadowed my public service record and as a result, I will find it extremely difficult to pursue my advocacy for electoral reforms in the Comelec,” he said.

“I maintain that I was the victim, not the perpetrator of the electoral fraud,” he added, insisting that his 30 years of government service had been ignored because of the electoral protest case.

“Never was I ever involved in any case of fraud, corruption or misconduct,” Lanto maintained.

Despite his decision  to reject the appointment,  he assured the President that he would pursue reforms for the electoral process in his personal capacity.

Lanto was appointed to key positions by former Presidents Fidel Ramos, Joseph Estrada and Gloria Macapagal-Arroyo in the past, appointments for which he claims to have gone through background checks.