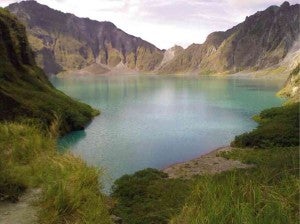 ANCESTRAL DOMAIN The Aeta people of Botolan, Zambales, assert their control over Mt. Pinatubo as it is within their ancestral domain and territory recognized by the national government. TONETTE OREJAS/INQUIRER CENTRAL LUZON

CITY OF SAN FERNANDO—Local and foreign visitors geared for a climb to Mount Pinatubo found themselves being stopped by an Aeta group in Barangay (village) 3Sta. Juliana in Capas town in Tarlac on March 2 in the latest attempt by the tribal people to assert their control over the management and use of the volcano.

“We have been asking the Capas local government to respect the sacred site, allow us to do rituals there and give us shares from tourism fees,” Carlito Domulot, chair of Lubos na Alyansa ng mga Katutubong Ayta sa Sambales (Lakas).

Pinatubo, which erupted in June 1991, is within the territory covered by a certificate of ancestral domain title (CADT) that the National Commission on Indigenous Peoples (NCIP) issued in November 2009 for 1,302 families or 4,370 people in Botolan and San Marcelino towns, Domulot said.

Former NCIP Commissioner Rolando Rivera, who reviewed the claims, confirmed that the volcano is within the CADT area.

When the trekkers came, seven Aeta men appeared past the Tarlac side of the volcano and there could be more of them outside the path where off-road vehicles pass through, a tour operator told the Inquirer. The source asked not to be named, saying it was a sensitive issue to the Capas municipality.

The tribal group, however, allowed the trekkers to go up the crater where a 3-kilometer-wide lake formed from rainwater.

Capas Mayor Antonio Rodriguez did not reply to calls and messages from the Inquirer.

Documents showed that the CADT application originally covered 20,567.89 hectares of land. The size was reduced to 15,998.4748 ha after government agencies recognized and segregated private titles within the ancestral domain.

The final CADT spans the villages of Burgos, Villar, Moraza and Belbel in Botolan, and portions of the towns of Cabangan, San Felipe and San Marcelino.

The volcano straddles Villar and Belbel.

Domulot said he was not involved in the March 2 incident but learned about it and discouraged it.

He said it should not have happened had Rodriguez agreed to the terms raised by the Aeta community in Botolan through the town’s mayor, Nerma Yap, in 2008.

These included allowing them to perform rituals, banning swimming, and getting 40 percent of proceeds to support health needs and rehabilitation of communities at the upper flanks of the volcano.

The Botolan council issued in August 2008 a resolution recognizing Aeta ownership and management over Pinatubo and requiring consultations with and consent from them. This would help the people protect their domain from Korean and other foreign and local business ventures, the council said.

Although vigilant against Korean firms on the Tarlac side, the Aeta have not built gates or watchtowers to ward off strangers.

“The local government of Capas has not asked for our free and prior informed consent when they allowed tours to the volcano,” Domulot said. “They are disrespecting a sacred site.”

He said his people have no quarrel with fellow Aeta on the Capas side because their elders recognize that the volcano belongs to the Botolan tribe.

“This is a case where the owner of the house was stripped of his right to say how things should be done in his abode,” he said.

Zambales Vice Gov. Ramon Lacbain II said the issue was discussed by the provincial board and referred to Zambales Rep. Jun Omar Ebdane to protect the interest of the Aeta people.