‘Summer program for jobs, not politics’ 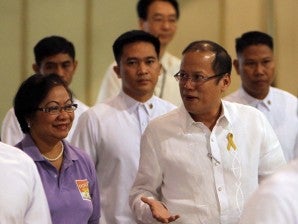 Pres. Benigno S. Aquino III arrives at the at the SMX Convention Center, Pasay City for the Department of Labor and Employment’s 79th Foundation Anniversary. Beside him is DOLE Sec. Rosalinda Baldoz. INQUIRER FILE PHOTO

MANILA, Philippines—Don’t use the students and out of school youth that will be hired under the government’s summer jobs program for political activities.

The warning was aired by the Department of Labor and Employment (DOLE) to local government units, saying the jobs program was designed to help students and out of school youth appreciate real work situations.

Nicon Fameronag, DOLE public information officer, said that under the agency’s Special Program for Employment of Students (SPES), the youths are to be partially paid with government funds so they should not be used for election-related activities.

“They should be able to develop skills, love for and the right attitude toward work, so it would be better if they experienced the actual work place. They should not be assigned to election campaigns,” Fameronag said.

This year, P441.5 million has been allocated for the program which is expected to benefit around 180,000 poor but deserving students all over the country.

The program allows qualified high school, college, vocational school students and out of school youth to earn money for their education by encouraging their employment by local government units and private partner companies.

Fameronag said those hired by local governments should be assigned clerical or administrative duties and other tasks related to their courses of study.

“They may also be assigned to private corporations, like fast food chains,” he said.

He said the Commission on Elections (Comelec) exempted the DOLE program from the ban on hiring workers during the election period.

Under SPES, DOLE pays 40 percent of the students’ salaries. The rest is paid by the participating local governments and companies.

“The DOLE highly considers the private sector and the LGUs as partners to reinforce the long-term impact of the program on our student beneficiaries. Such partnership is borne out of their corporate social responsibility as they take part in helping more students,” Baldoz said.

Citing a report by the Bureau of Workers with Special Concern (BWSC), Baldoz said 138,635 students or 99.03 percent of the 140,000 target beneficiaries were employed under the program last year.

“With the reinforced implementation and strengthened partnership with the private sector in 2012, the DOLE has again made an impact in the lives of thousands of Filipino youths who don’t have the means but have the ability to pursue a college education,” she said.

Established in 1992 under Republic ActNo. 7323, which was amended by RA 9547, the SPES is open to all qualified high school, college and vocational or technical school students, and out of school youth.

Under the SPES act, students and out of school youth who meet the following criteria are eligible for the program: They must be between 15 and 25 years old; the combined net income of their parents, including their own income if any, should not exceed the latest annual regional poverty threshold level for a family of six as determined by the National Economic and Development Authority, and applicants must have an average passing grade in the last school term attended (for students).

Qualified out of school youth may visit the Public Employment Service Office (Peso) in their locality and submit the SPES requirements, which include the duly accomplished SPES application form; copy of birth certificate; copy of latest income tax return of parents or BIR certification that parents are exempted from paying tax, and certificate of good moral character issued by a barangay official from their place of residence.

A certification from the school registrar bearing the date of last enrollment and a copy of the original class card or Form 138 are additional requirements for SPES student-applicants, Baldoz said.