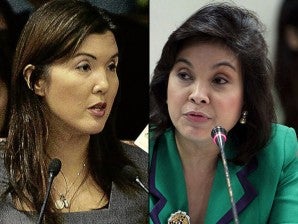 MANILA, Philippines—The country has now enough laws meant to protect the rights of women but these have yet to be effectively implemented, reelectionist Sen. Loren Lagarda said on Friday as the country marked International Women’s Day.

Sen. Pia Cayetano, chair of the Senate committee on youth, women and family relations, said strides had been made to protect women but added that much have yet to be done to push women’s interests throughout the country.

“We have diligently toiled to enact pieces of legislation to protect the rights of women and promote their welfare,” Legarda said in a statement.

“The greater challenge is to effectively implement these laws and educate women on their rights. Women around the country should be aware that they are sufficiently protected under various laws,” she added.

Promise is a promise

Legarda, one of the senators who voted for the Reproductive Health Law that promote maternal and child health, said the United Nations’ theme for this women’s day celebration is, “A promise is a promise: Time for action to end violence against women.”

She said that with the country’s laws on women’s rights, such as the Anti-Violence Against Women and Children Act, the Magna Carta of Women, and the Expanded Anti-Trafficking in Persons Act, the Philippines “can fulfill this promise.”

“We recognize the significant efforts being undertaken by the Philippine government to curb violence against women,” Legarda said.

“Now, we can do even better on this especially with the recent passage of the Expanded Anti-Trafficking in Persons Act, which now covers attempted trafficking and accomplice liability,” she added.

Legarda said that under the antitrafficking law, recruitment in the guise of domestic or overseas employment for sexual exploitation, forced labor or involuntary debt bondage were now considered human trafficking.

Other acts considered as human trafficking are recruitment of any Filipino woman to marry a foreigner, engagement in sex tourism, recruitment for organ removal, and recruitment of a child to engage in armed activities abroad, she added.

Legarda said even laws on climate change—such as the Climate Change Act and the National Disaster Risk Reduction and Management Act—could help protect women, especially since human traffickers had the tendency to look for potential victims among survivors of disasters.

“It is important to realize that the changing climate will have its worst effects on the poorest of the poor,” Legarda said.