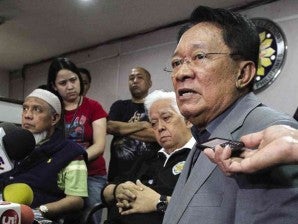 Haunted by his past as a congressman who was unseated for poll fraud, newly appointed Commission on Elections (Comelec) Commissioner Macabangkit Lanto on Friday protested that he was a victim and that there was an “orchestrated move” to discredit him by people opposed to his appointment.

Lanto, 70, has barely had time to warm his seat as a Comelec commissioner but now has to answer attacks on his credibility arising from the 20-year-old case.

Malacañang on Friday said it was reviewing Lanto’s appointment after learning belatedly that he was unseated in 1994 for electoral fraud.

But Palace officials could not as yet say if the President could still withdraw the appointment.

“Apparently, there is an orchestrated move to discredit me because of an event that happened 20 years ago when I was unseated as congressman of Lanao del Norte,” Lanto said in a press conference that was called soon after he paid a courtesy  call on Comelec Chair Sixto Brillantes Jr. Friday.

In 1994, Lanto was stripped of his congressional post after the House of Representatives Electoral Tribunal (HRET) ruled that he appeared to have been the beneficiary of election fraud, which got him elected as congressman of the second district of Lanao del Norte in the 1992 elections.

The HRET decision cited two falsified municipal certificates of canvass, which it noted were derived from tampered election returns (ERs). It also noted that ballots had been tampered with to support the fake ERs.

Lanto reclaimed the congressional post when he ran—and won—in the 1998 elections for the same district.

Lanto on Friday said he won the election “fair and square” and that, like Sen. Joker Arroyo, he was a victim of manipulation by a syndicate at the HRET at the time.

“The politicians whom I defeated cannot accept the fact that they lost to somebody who was unknown. I was just an ordinary practitioner in my province so they banded together and they filed a protest case against me,” he said.

He said he was pitted against powerful politicians in Lanao del Norte, who were proteges of the Dimaporo political clan and former senator and labor leader Ernesto Herrera.

“I didn’t have any backers at that time. Then President Cory Aquino wanted new faces, new leaders so I was asked by some friends to file my candidacy, [and] I filed and I won fair and square,” he said.

He admitted that his appointment to the Comelec was endorsed by Sen. Franklin Drilon, the campaign manager of the Team PNoy senatorial slate.

President Aquino on Thursday appointed Lanto to one of two commissioner posts left vacant by the retirement last month of Commissioners Rene Sarmiento and Armando Velasco. The other new appointee is lawyer Maria Bernadette Sardillo.

Lanto said he was ready to serve the Comelec with independence and impartiality. He also vowed to pursue the electoral reforms being pursued by the Comelec.

“I think my previous record in the government will [prove that] … I have shown independence and impartiality, [and] there was never a case filed against me for corruption or indiscretion,” he said.

“At my age, I can say that I have no wish but to leave a mark in the commission, and I will be impartial in my judgment,” he said.

Though already signed, Lanto’s appointment papers have yet to be submitted to the congressional Commission on Appointments (CA) for approval as Congress is currently in recess.

“We’re discussing options, but nothing to announce yet,” said a Palace official who spoke on condition of anonymity.

But presidential spokesperson Edwin Lacierda went ahead and issued a statement anyway in an apparent attempt at sparing Mr. Aquino from embarrassment.

“On the issue of Mac Lanto, this is our statement: ‘Our social contract with the Filipino people includes the restoration of the credibility of the electoral process as one of its main tasks. Be assured that any concerns about Comelec appointments will be resolved in a timely manner,’” said Lacierda.

Lacierda refused to confirm if Drilon had indeed endorsed the appointment of Lanto.

Neither was he “in a position to answer” if the President would recall the appointment as it has yet to be transmitted to the CA.

When he announced the new Comelec appointments in an ambush interview, the President said that he was “sending their appointment to Congress for confirmation by the Commission on Appointments.”

He described Lanto in glowing terms, saying that the former lawmaker had occupied several government positions with a “very extensive” track record as ambassador to Egypt and Sudan.

“He has proven his worth, I believe, during the times that he performed, or tried to perform, his function when the higher-ups were preventing him from doing what should have been done,” Mr. Aquino said.

In 2001, Drilon recommended that Lanto be appointed officer in charge and acting governor of the Autonomous Region in Muslim Mindanao.

He said Lanto possessed the “combined skills of a diplomat, a graft-busting prosecutor and effective manager-bureaucrat.”

The Inquirer tried to contact Drilon yesterday but the senator had yet to respond as of press time. A member of his staff said he was attending a wedding on Friday.

No party to fraud

Quezon Rep. Lorenzo Tañada III, the spokesperson for the administration’s Liberal Party-led coalition, said it was for Lanto to answer the negative publicity surrounding his appointment.

He said the ruling coalition would not be a party to any fraud in the May elections, in reaction to a statement from rival United Nationalist Alliance (UNA).

“First of all, let’s put it into context. [Lanto’s] incident happened 20 years ago. We leave it to the wisdom of the appointing power to choose who he feels he has confidence in,” Tañada told a news briefing.

“Now, what you can be sure is that Team PNoy will stand for clean and honest elections, and we believe that Mr. Lanto will be able to answer whatever accusation is hurled against him. And I think he has been doing that,” he added.

Team PNoy spokesperson Marikina Rep. Miro Quimbo said Lanto still had to go through the confirmation wringer of the CA.

“Each candidate or appointee is given his or her day in court to explain his or her capability, all his or her positive points and track record.  So we will let the process take care of that,” he said.

UNA campaign manager Navotas Rep. Toby Tiangco alleged that Lanto had landed the Comelec post because Drilon had lobbied for him.

“He has no other qualification except being a crony of Senator Drilon. Being a congressman who was removed from office because of fraud is not something that gets you into the Comelec,” Tiangco said in a statement.

“How can the people trust a Comelec commissioner who was proven to have cheated? How can he be expected to watch out for cheating when he himself was found and proven to have benefited from fraud?”  he said.

Tiangco warned of a “sinister agenda” behind Lanto’s appointment, which is to ensure the victory of all 12 senatorial candidates of the administration’s Team PNoy.

“Our information is that Senator Drilon really lobbied hard for the appointment of Lanto. He desperately wanted Lanto in the Comelec. There is obviously a sinister agenda behind it and that agenda is Drilon’s 12-0,” he said.

“Senator Drilon has been consistent in his fearless forecast of an administration sweep of the May elections. With the surprise appointment of his crony to the Comelec, we now know the reason for his smugness. He has an added ace in the Comelec,” he added. With Christian V. Esguerra