But says gains are exclusive to only a few Filipinos
By: Jerry E. Esplanada - @inquirerdotnet
Philippine Daily Inquirer / 01:27 PM March 08, 2013 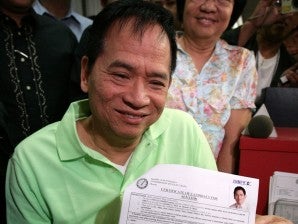 BATANGAS CITY, Philippines—Bangon Pilipinas’ lone senatorial candidate Bro. Eddie Villanueva on Friday credited the  Aquino administration for the “country’s remarkable economic growth” but said the gains were “not inclusive but exclusive to only a few Filipinos.”

Speaking before some 250 supporters who showed up at the Batangas Provincial Capitol here, the leader of the Jesus is Lord church stressed the need for “urgent reforms in government’s policies to ensure that the poor are not left out of the nation’s economic gains.”

“While we recognize the advances made by government in investments, infrastructure development and the economy in general, we should continue to ask this question: Where are the people, especially the marginalized sectors, or the ‘saguiguilid’, in the bigger scheme of things?” he said.

“The so-called progress does not seem to be reaching everyone,” Villanueva added.

The evangelist’s campaign is anchored on “inclusive growth that will benefit poor Filipinos.”

In a statement, Villanueva said the government “has failed to deliver on its promise to alleviate the plight of the saguiguilid.”

“Clearly, the widening gap between the rich and poor Filipinos shows how the government has failed in its decades-old promise of bringing development and prosperity to the country’s poor,” he said.

“The government’s economic managers need to give more focus to bridging the increasing divide between the rich and poor,” Villanueva said, adding that statistics bear out the common sentiment that very few Filipinos are benefiting from the country’s economic growth.”

He said also that the government was  “not doing enough to generate jobs.”

“Graduating college students will face difficulty in finding jobs, the same problem faced by many Filipinos who entered the workforce in past years. Sadly, the government is making very limited progress in creating the environment that encourages the creation of jobs here,” he said.

If elected, Villanueva said, he would “make sure the country’s saguiguilid will not be left out of our nation’s achievements.”

Before his meeting with Governor Vilma Santos, he was welcomed by Batangas Vice Governor Mark Leviste, who gave him a native Batangas hat.