US ‘fully capable’ of defending against North Korea threat 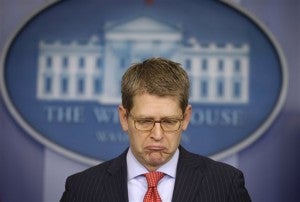 WASHINGTON—The United States said Thursday it was “fully capable” of defending itself and its allies against any North Korean missile strike, after Pyongyang threatened to launch a nuclear attack.

The US military could deal with any such attack, US officials said, repeating earlier warnings that North Korea would gain nothing by provocations, while stressing they took its threats seriously.

“I can tell you that the United States is fully capable of defending against any North Korean ballistic missile attack,” said White House spokesman Jay Carney.

“Our recent success in returning to testing of the upgraded version of the so-called GBI or the CE-II missile will keep us on a good trajectory to improve our defense capability against limited ballistic missile threats.”

Before the UN Security Council voted to impose tough new sanctions on North Korea over its February 12 nuclear test, Pyongyang earlier threatened a “pre-emptive” nuclear strike against the United States.

State Department spokeswoman Victoria Nuland said Washington was taking the threats seriously, but “extreme rhetoric has not been unusual for this regime.”

“You have to take a government at its word when it makes these kinds of threats, which is why we are making clear that we have not only full defensive capability for the United States but that we’re prepared to defend our allies,” she added.

Nuland also urged Pyongyang to give up a threat to scrap the 1953 armistice agreement that ended the Korean War.

North Korea announced on Tuesday that it would “completely declare invalid” the agreement from March 11 in response to tougher UN sanctions, theoretically removing the only barrier to a resumption of full hostilities.

Nuland refused to say whether that would leave the US technically at war again with North Korea.

“There are obviously legal procedures and ways that this would have to actually be implemented if the DPRK were looking to pull out of it,” she said, referring to the North’s official name.

She stressed, though, that “this armistice has been one of the underpinnings of peace and security on the Korean Peninsula, so we would obviously urge that this not be the direction that we go.”