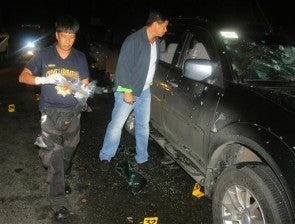 In this Jan. 6, 2013, file photo released by the Philippine National Police Quezon Provincial Director’s Office, Quezon provincial police chief Valeriano de Leon, right, looks at a bullet-riddled vehicle at a checkpoint along a road in the town of Atimonan in Quezon province. Security personnel originally claimed the incident as a shootout with suspected criminals, but investigators said the police operation plan carried out by Supt. Hansel Marantan purportedly to neutralize a crime ring was a “mere subterfuge” to kill a competitor in “jueteng.” AP PHOTO/PHILIPPINE NATIONAL POLICE QUEZON PROVINCIAL DIRECTOR’S OFFICE

MANILA, Philippines—The police operation plan carried out by Supt. Hansel Marantan purportedly to neutralize a crime ring was a “mere subterfuge” to kill a competitor in “jueteng” that has continued to flourish despite well-publicized government pledges to eliminate the illegal numbers racket, investigators said.

Findings by the National Bureau of Investigation of the

In its executive report, which was approved in full by President Aquino, the NBI, however, cleared the PAOCC of any role in the “rubout” in Atimonan that left alleged jueteng operator Vic Siman and 12 others, including police and military personnel, dead.

Piecing together testimonies and documents, the investigators established that Siman engaged in video “karera” operations in Calamba City, Laguna province, before venturing into jueteng, a multibillion-peso activity that the late Interior Secretary Jesse Robredo had campaigned against because of its pernicious effects.

Siman’s video karera operation was “greatly affected” by the entry of a certain ‘Ka Tita,’ who used to operate a nightclub in Ermita, Manila. A rivalry soon followed between the newcomer and Siman, the reputed “gambling lord” of Laguna.

Ka Tita’s move to Laguna coincided with the transfer there of Marantan from the Highway Patrol Group in Quezon City, the NBI said.

Even so, Siman maintained control of the jueteng operations in the province. Still, Ka Tita’s operations flourished “unhampered and unmolested” by the police, since her business was “under the protective mantle” of Marantan, the NBI said.

To keep his hold on jueteng in the province, Siman banded with other gambling operators in the Southern Tagalog area, identified as “Don Ramon” and “Fajardo,” eventually establishing contact with the criminal syndicate “Batang Kubo.”

Over time, the rivalry led to the killings of civilian and police protectors of Siman and Ka Tita, the investigators said. The NBI was working on leads that the real killers of former newsman Nelson “Nixon” Kua were hired guns from Siman’s group.

Given the dynamics in the province, Siman was also “after the head” of Marantan while the police officer was using his authority to “silence” Siman, the NBI said.

Coplan Armado was based on “intelligence information” gathered by Marantan about the alleged involvement of several individuals in jueteng and in the “turf wars” among the financiers, it said.

But the NBI observed “misinformation” brought about by a “defective and unverified” Coplan Armado. For instance, there were many “targets” mentioned in the plan but only Siman was part of the convoy.

If indeed Siman’s group was on a criminal mission, they would not have used vehicles registered in their names. And if indeed private armed groups were hired to liquidate certain personalities, they would have had in their possession unlicensed firearms, it said.

But all the firearms recovered from the victims at the crime scene were licensed, except for one, the NBI said.