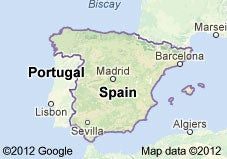 MADRID—Gardeners, waiters, cooks and other workers at Spain’s royal palaces will go on strike for the first time over Easter to protest against salary cuts and longer working hours, their union said Wednesday.

About 500 workers of the National Heritage, the state body charged with looking after Spain’s palaces and other historical sites, will strike on Holy Thursday on March 28 and Good Friday on March 29, the CSI-F union said.

Among the sites affected will be Madrid’s vast Royal Palace, built on a high bluff overlooking the Manzanares river and which is used for state occasions; the Valley of the Fallen mausoleum, where dictator Francisco Franco is buried; and the Escorial Palace near Madrid.

The strike would not affect the royal family, a spokesman for the royal household said.

The union said the sites could lose some 100,000 visitors because of the strike.

National Heritage staff say they are furious over government measures that have slashed their wages by 15 percent and extended their working hours.

The first strike by palace workers comes at a delicate time for the king, who is recovering in hospital after undergoing lower back surgery over the weekend while his son-in-law Inaki Urdangarin is under investigation for allegedly embezzling millions of euros of public money.

Read Next
Pablo John accuses Magpale of PDAF freeze
EDITORS' PICK
Metro Manila to remain under COVID Alert Level 2 until December 15
IATF tightens border control, suspends entry of fully vaxxed nationals from ‘green’ countries
Villar Group gears up for AllValue Shopping Party on Dec. 3; around P 1-million promos and discounts up for grabs
Duterte open to making jabs mandatory; Cabinet mulls ‘pressuring’ the unvaccinated
Legarda: Ending Violence Against Women, a cause for all
A delightful blessing!
MOST READ
Quiboloy warns of ‘much worse than Omicron virus’ if his ‘persecution’ is not stopped
Marcoleta defends pol ads on ABS-CBN
Omicron poses ‘very high’ global risk, countries must prepare–WHO
Gov’t plans to open COVID-19 vaccination for 5- to 11-yr-olds by January 2022
Don't miss out on the latest news and information.