Gay power high on ‘Magsaysay is my guy’ 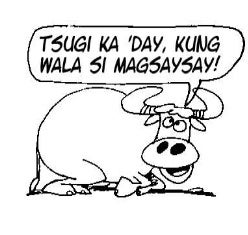 Struggling in 16th place in the latest Social Weather Stations (SWS) survey, former Sen. Ramon Magsaysay Jr. is counting on gay power to help boost his bid to land in the Magic 12 of the May senatorial elections.

Four weeks into the campaign period and still out of the winning circle, the son of the late Philippine President has won the support of several party-list groups, one of which represents the country’s marginalized gays.

On top of that, he has won the backing of people with disabilities, senior citizens, workers, farmers and scientists.

Magsaysay pledged to work for the interests of these sectors if given another term in the Senate.

“It’s a good sign that these party-list groups are behind our candidacy because it means that they believe in the kind of public service that we offer,” Magsaysay said on Tuesday.

“We are inspired to do more to push for the advancement of these sectors,” the administration candidate, who retired from the Senate in 2007 after two consecutive terms, said in a statement.

The Pilipinos with Disabilities Party-List, the Veterans Freedom Party (the electoral wing of the Veterans Federation of the Philippines) and the Senior Citizens Party-List also support Magsaysay’s comeback bid.

Other groups that have given Magsaysay their backing are the Bantay Bayan Foundation Inc., a group that pushes for good governance; Amin or Anak Mindanao; Alliance of Volunteer Educators; and the Federation of Free Farmers.

‘Much to be done’

Magsaysay has expressed disappointment with the latest SWS survey results but expressed optimism that his yet-to-be-released media placements and an intensified campaign effort would push him into the winner’s circle.

“I am affected by the results of the survey, of course. But that’s not enough reason to dampen my strong resolve to be of service to the people,” Magsaysay said.

“Modesty aside, I’ve accomplished a lot in my 12-year stint but there’s much to be done still,” the 74-year-old stalwart of the ruling Liberal Party said. “That’s why I would want to continue my work as a legislator and push for good governance as well as needed reforms.”

During his stint in Congress from 1995 to 2007, Magsaysay sponsored such laws as the Anti-Money Laundering Act that penalizes attempts to legitimize proceeds of crime, and the E-Commerce Act that makes electronic communication admissible as evidence.

“Hopefully, I am optimistic that we’ll do good in the next round of mock poll surveys and be among the top 12,” Magsaysay said. “We will continue to reach out to the electorate and study further the areas in which we should intensify our efforts in this campaign.”

Magsaysay said that at the time the latest SWS survey was held, his multimedia advertisements had not been released.