MANILA, Philippines – The friendship between former national security adviser Norberto Gonzales and Sulu Sultan Jamalul III dates back to the time of the Marcos regime, a former police intelligence officer told Radyo INQUIRER 990 AM on Tuesday. 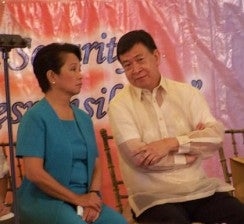 In this file photo taken from the archives of the Philippine Information Agency, National Security Adviser and Director General of the National Security Council Norberto Gonzales confers with President Gloria Macapagal Arroyo in a gathering. CONTRIBUTED PHOTO/PIA

In the Radyo INQUIRER interview, Retired Police Director Rodolfo “Boogie” Mendoza said he knew that Gonzales owed the sultanate for extending assistance and protection to the former national security adviser when he went in hiding in Sabah during the martial law period.

He said the Kiram family helped Gonzales, who was then on the military’s watch-list.

Gonzales met with the Sulu sultan during the weekend and has been tagged as a possible conspirator in the Sabah standoff but this was something that the former national security adviser denied.

For more of the interview, listen to the attached audio clip from Radyo Inquirer 990AM.