Party-List bats for overdue, additional benefits for war veterans, others 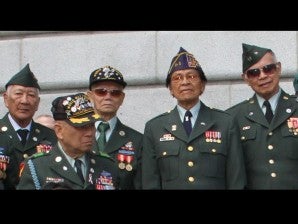 MANILA, Philippines—The Veterans Freedom Party (VFP), an accredited party-list group representing World War II veterans and their descendants, said they will work for the release of overdue and additional benefits for veterans, the group told Radyo INQUIRER 990 AM in a recent interview.

The group said they will also ensure the passage of legislations that will bestow significant benefits and services to senior citizens, the youth, and other marginalized sectors if it wins in the coming 2013 mid-term elections.

According to VFP nominee and party chairman, lawyer Eduardo P. Pilapil, one of the main thrusts of the party would be to champion the full release of the Total Administrative Disability (TAD) benefit as mandated by Republic Act 7696.

“It is a gross disrespect to our Filipino World War II veterans that the full release of the Total Administrative Disability benefits due to them remains unrealized,” said Pilapil.

“Many of our war heroes have already died waiting for these benefits which are in fact mandated by Republic Act 7696 signed in 1994. In almost two decades since the law was signed many living veterans are still asking ‘Where are our promised benefits?’”

Aside from the TAD issue, the presence of VFP representatives in Congress will push for the passage of legislation for the increase of old-age pension of all veterans, improvement of medical services including easier access to quality yet affordable medicine, and the expansion of education benefits accorded to families of veterans.

Moreover, as a party list, the VFP aims to be a dynamic catalyst of progress in Congress and will initiate on its own and work with fellow representatives in Congress to ensure the fulfilment of objectives that would be beneficial to all Filipinos especially in the areas of education, social and medical services for senior citizens, livelihood programs to spur job creation and environmental protection.

“Not only does the VFP represent the cause of veterans but also that of all Filipinos,” said Pilapil.

“This is an inherent trait that must be possessed by all party-list: that the party-list be able to contribute to the formulation and enactment of appropriate legislation that will benefit the nation as a whole.”

Pilapil underscored that despite the dwindling numbers of veterans, the legacy of our war heroes continue to live on through their children, their grandchildren, and to the next generation. Thus, the VFP not only represents the past generation but also the future generations.

“The men and women who compose the VFP believe in the traits and virtues that were showcased by our heroes during World War II – that of patriotism, determination, resourcefulness, and the never-ending belief in freedom,” said Pilapil.