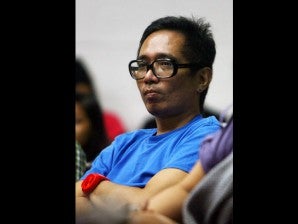 MANILA, Philippines—The Office of the Ombudsman has dismissed the criminal and administrative complaints against artist Mideo Cruz and 10 officials of the Cultural Center of the Philippines (CCP) in connection with the controversial “Kulo” art exhibit.

Cruz’s “Poleteismo” – a wall collage consisting religious statuettes, religious icons, graduation photos, calendars, maps, and images of actors, politicians, sports stars and pop celebrities – was among those shown in the Kulo art exhibit from June 17, 2011 until it was prematurely closed down on August 9, 2011.

Manuel Dayrit filed an administrative complaint against the said officials for violation of Republic Act No. 6713 or the Code of Conduct and Ethical Standard for Public Officials and Employees.

It was followed by a separate case filed by Eusebio Dulatas, Jr. against Abrera and Sunico for Grave Misconduct and Conduct Unbecoming of a Public Officer or Employee.

Dayrit and Dulatas also filed separate criminal complaints for violation of paragraph 2(b), Article 201of the Revised Penal Code (RPC) against Cruz and the CCP officials.

Article 201 2(b) of the Revised Penal Code which punishes “those who, in theaters, fairs, cinematographs or any other place, exhibit, indecent or immoral plays, scenes, acts or shows, whether live or in film, which are prescribed by virtue hereof, shall include those which (1) glorify criminals or condone crimes; (2) serve no other purpose but to satisfy the market for violence, lust or pornography; (3) offend any race or religion; (4) tend to abet traffic in and use of prohibited drugs and (5) are contrary to law, public order, morals, and good customs, established policies, lawful orders, decrees and edicts.

In her 34 page ruling released to the public Monday, Ombudsman Conchita Carpio-Morales

said Poleteismo does not fall under “obscene” exhibitions.

It held that otherwise censoring offensive artworks is a form of prior restraint generally prohibited by the Constitution, there being no showing that it falls under the limited exceptions where an expression (e.g., pornography) may be subject to prior restraint.

Morales said “applying jurisprudence, it ruled that the artwork neither depicts, in a patently offensive way, sexual conduct nor appeals to the prurient interest.  Nor was it found to be lacking in serious literary, artistic, political or scientific value as to remove it from the ambit of constitutionally protected expression.”

On other hand, in dismissing the administrative case, the Ombudsman said “since they had no legal duty to prohibit the exhibit which was found to be not obscene, the element of clear intent to violate the law or flagrant disregard of established rule is lacking, and thus there can be no grave misconduct on the part of the CCP officials.”

Read Next
Mindanao signature campaign vs political dynasties kicks off in CDO
EDITORS' PICK
Bongbong Marcos says PH ‘open for business’ with new Clark Airport terminal
Individuals affected by ‘Karding’ now over 157,000
Newbie gamers are in for a treat with the power-packed feature of vivo Y16
Karding damage to infrastructure at P23M
House energy committee chair Arroyo bats for cheap electricity
Reignite your passion with the vivo Y35
MOST READ
Angelica Panganiban ‘duguan, sugatang mom’ one week into breastfeeding
LPA enters PAR, may develop into tropical depression
Badoy not with Office of the President, NTF-Elcac, under Marcos admin — solon
Charges readied vs gov’t guard with P290-M deposits
Don't miss out on the latest news and information.