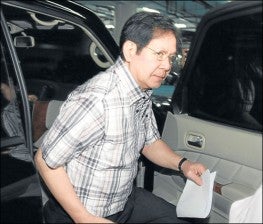 MANILA, Philippines – The Supreme Court on Monday dismissed with finality the multiple murder case against Senator Panfilo Lacson in connection with the Kuratong Baleleng rubout.

In a two-page resolution, the high court denied the appeal filed by the government’s Office of the Solicitor General (OSG) for failure to raise new issues that would warrant a reversal of its last year’s ruling.

“The court resolved to deny with finality the said motion for reconsideration as the basic issues raised therein have been passed upon by this court and no substantial arguments were presented to warrant the reversal of the questioned decision,” the resolution stated.

In December last year, the high court upheld the November 2003 decision of the Quezon City Regional Trial Court Branch 81 that dismissed the multiple murder case against Lacson and 33 others.

In a 24-page decision, the high court through Associate Justice Roberto Abad, said QC RTC Branch 81 Judge Ma. Theresa Yadao did not abuse her discretion when she dismissed the case against Lacson and several others for lack of probable cause.

Probable cause are facts discovered through investigation that would lead a reasonably intelligent and prudent person to believe that a person has committed a crime and deserves to be prosecuted.

“The court agrees with Judge Yadao that the above affidavits and reports, taken together with the other documents of record, fail to establish probable cause against the respondents,” the high court said.

Prosecutors have submitted to the lower court five affidavits from witnesses and reports from the Philippine National Police.

Still, the prosecutors said, Judge Yadao should have ordered them to present additional evidence as stated under Rule 112 of the Rules of Court if she still has doubts in determining if there is probable cause to order the arrest of the accused or not.

But the high court pointed that requiring the prosecutors to present additional evidence is not mandatory.

“It is only ‘in case of doubt on the existence of probable cause’ that the judge may order the prosecutor to present additional evidence within five days from notice. But that is not the case here. Discounting the affidavits [submitted by the prosecution], nothing is left in the record that presents some doubtful probability that respondents committed the crime charged.”
“In the absence of probable cause to indict respondents for the crime of multiple murder, they should be insulated from the tribulations, expenses and anxiety of a public trial,” the high court added.

Yadao, in her ruling said the evidence submitted by the prosecution as well as the testimonies of the new witnesses — Senior Inspectors Ismael Yu and Abelardo Ramos, Senior Police Officer 1 Wilmor Medes, SPO2 Noel Seno and civilian agent Mario Enad — were “full of loopholes making the accusations less credible and bereft of merit.”

Lacson, along with Chief Superintendents Jewel Canson, Romeo Acop and Francisco Zubia, Senior Superintendents Michael Ray Aquino, Cesar Mancao III and Glenn Dumlao and 31 other police officers were indicted for the murder of the alleged members of Kuratong Baleleng robbery gang on May 18, 1995.