Dexter Condez: A voice of courage for Ati folk 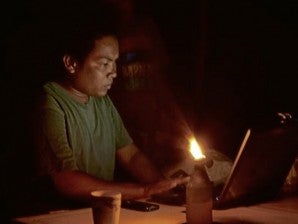 ATI TRIBE spokesperson Dexter Condez is photographed working at the land in Barangay Manoc-Manoc on Boracay Island, days after the Ati occupied the property in April 2012. Less than a year later, Condez was gunned down. SONNY ESTOLLOSO/CONTRIBUTOR

BORACAY ISLAND—Dexter Condez had learned to fight for his rights at a young age.

When he was in Grade 4, he stopped going to school because he was teased and bullied by his classmates for being an Ati. Articulate and passionate, he believed that a person’s worth is not measured by the color of the skin.

On Feb. 22, a lone gunman claimed the life of the young man who had been on the front line in the Ati people’s fight to occupy and own a 2.1-hectare property in Barangay Manoc-Manoc on Boracay Island, which they believe is part of their ancestral domain.

Condez, 26, was shot eight times—one bullet pierced his heart—while he was on his way to the Ati community in Manoc-Manoc.

Police tagged a security guard of a hotel chain in Boracay as suspect. A murder complaint was eventually filed against the guard, Daniel Celestino, of Crown Regency Boracay Resorts in the Aklan provincial prosecutor’s office in the capital town of Kalibo.

Teddy Jimenez, resident manager of the Crown Regency Resort and Convention Center, confirmed that Celestino was assigned to the hotel but that the company had nothing to do with the crime.

The Crown Regency Resort and Convention Center is one of three hotels being operated by Cebu-based J. King and Sons Co. Inc., which is among at least three property claimants opposing the Ati occupation of the Manoc-Manoc lot since last year.

Before his death, Condez was spokesperson of Boracay Ati Tribal Organization    and worked closely with the Holy Rosary Parish Ati Mission (HRPAM), which was put up by the Daughters of Charity of St. Vincent de Paul in 2000 to help the Ati people acquire a permanent residential land in Boracay.

Condez had just attended a meeting of tribe leaders and nuns shortly before he was killed. They discussed activities and projects and updates on pending cases related to the certificate of ancestral domain title granted by the government in Manoc-Manoc.

Benjamin Abadiano, president of  Assisi Development Foundation Inc., said Condez was in charge of the group’s social entrepreneurship program and was helping draft a curriculum for an education program for the community.

The second of four siblings, Condez was born in Barangay Cubay in Malay town in Aklan. His mother, Madeline, was an Ati.

His parents separated and his mother remarried. When he was 6 years old, he  was adopted by his aunt, Evelyn Supetran.

In Grade 4, Condez dropped out of Balabag Elementary School in Boracay because his classmates teased and bullied him for being an Ati. He was, however, accelerated to Grade 6 after taking a qualifying examination but transferred to Dueñas town in Iloilo, the hometown of his father, Edgar, because he didn’t get along with his grandfather.

He finished his elementary and part of his high school education in Dueñas. He graduated from high school at Colegio de San Jose in Iloilo City.

Condez enrolled in the same college for a year in a secondary education course, but he again dropped out due to a personal problem and went back to Boracay where he worked in a mini grocery.

He volunteered for  the Ati mission in 2010 and became the tribe’s spokesperson shortly after.

“Dexter wanted to be a lawyer because he saw the need for our tribe to be represented in legal issues and cases,” said Luna, a close friend of Condez, who spoke on condition of anonymity due to security concerns.

She said Condez helped her with her personal problems and community work and other tasks delegated by the nuns. Condez remained down-to-earth and simple despite his position in the tribe.

Luna said her friend always prodded tribe members to remain firm amid difficulties and uncertainties. “Don’t lose hope,” he would always tell them.

Sr. Hermie Sutares, HRPAM program coordinator, said Condez also wanted to take up journalism or anthropology to help the tribe. He excelled in the arts even if he had dropped out of school, she said.

“He was naturally intelligent and could easily grasp and explain things and concepts,” Sutares said.

Condez also mastered declamation. He directed the community plays and the Ati choir, which sings during Sunday Mass at the Boracay parish church.

“We were developing him to take over as program coordinator because we will not be here forever. I was confident in delegating tasks and responsibilities to him,” Sutares said.

Those who had worked with or were close to Condez described him as “cheerful and lively.”

“He enlivens our training workshops because of his creative ideas,” Abadiano said.

“He also served as a link between the elder tribe members and the younger generation which may be the reason they made sure he was dead,” he said.