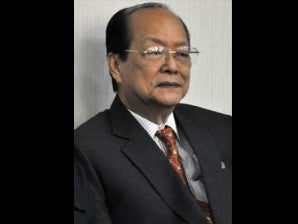 MANILA, Philippines — Former senator Ernesto Maceda Jr. on Thursday denied that he violated any of the Commission on Elections’ (Comelec) regulations after being seen in a video participating in a raffle.

In an ambush interview in UNA’s first campaign rally here in Dasmariñas City, Cavite, Maceda said that he was ready to clear his name if summoned by the poll body to explain his side.

“I will explain when I receive (information from Comelec). There was no raffle,” he told reporters.

He was reacting to the Commission on Elections’ (Comelec) move to investigate him for allegedly holding a raffle with a cash prize while campaigning.

Maceda was seen announcing a P500 prize to a winner in a video of a campaign rally taken by GMA Network.

Also subject for investigation are Manila Representative Amado Bagatsing and Ali Atienza who were seen with the senatorial candidate in the video.

But Maceda said that he was not the one who held the raffle but was merely asked to pick the winner.

He said that the raffle did not even push through.

Comelec chairman Sixto Brillantes Jr. was earlier quoted as saying that Maceda will be given due process.

Maceda was not the first national candidate to fall under scrutiny for possible violation of Comelec’s poll regulations.

Maria Ana Consuelo “Jamby” Madrigal, a Liberal Party senatorial bet, was earlier questioned by the Comelec for holding a contest for an iPad on Facebook.