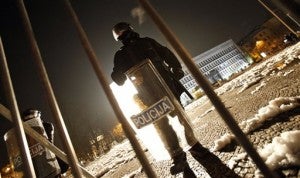 LJUBLJANA, Slovenia—Slovenia’s parliament ousted Prime Minister Janez Jansa and his conservative government Wednesday, while designating a financial expert from the opposition to try to form a new administration.

The moves come amid corruption allegations against Jansa and growing public anger over the struggling economy and austerity measures that have seen living standards fall and unemployment rise.

The 55-33 no-confidence vote named Alenka Bratusek as prime minister-designate. Bratusek, 42, would be the first female to lead Slovenia’s government since its secession from Yugoslavia in 1991.

Jansa’s government, which was elected a year ago, fell apart when three of the five parties in his ruling coalition quit the Cabinet after the state anti-graft watchdog accused the prime minister in January of corruption. He was alleged to have failed to declare €210,000 ($285,000) of his personal assets.

Bratusek now has 15 days to form a new government and avoid holding early elections. Such elections would prolong the search for a solution to Slovenia’s deep recession, which was partly triggered by the European Union’s financial woes.

Slovenia, which joined the EU in 2004 and the eurozone in 2007 as a model newcomer, is on the brink of becoming the sixth EU country to seek an international bailout to finance its beleaguered banks and their bad loans, which amount to some €7 billion ($9 billion).

Bratusek, who worked in the finance ministry in charge of the state budget before becoming a lawmaker in 2011, would head the government for at least a year until new elections are held.

She told Parliament she would work on reviving Slovenia’s economy and reforming the banking sector to try to avoid seeking an estimated €5 billion ($6.5 billion) in an EU bailout.

“I say it clear, there will be no Greek scenario in Slovenia,” Bratusek said, referring to the financial problems that have left Athens relying on international loans.

Slovenia has faced a series of street protests against austerity and corruption since December as unemployment hit a 14-year high at about 13 percent, and living standards plunged because of the government’s spending cuts.

“At this moment, many Slovenes think there is no solution,” said Bratusek, who heads the center-left Positive Slovenia party. “I say, there is a solution.”

Jansa, a veteran politician who also led the government between 2004 and 2008, praised his austerity program and denied the corruption allegations, saying they were politically motivated to weaken his administration.

He warned the nation of 2 million could face bankruptcy after his unseating.

“Greece is slowly turning to recovery,” Jansa said. “I would be happy to say the same for Slovenia.”

The Alpine nation’s economy is expected to shrink by a further 2 percent this year after dropping by about 2.5 percent in 2012—the most in the EU after Greece and Cyprus due to weakening investment and faltering domestic consumption.