What happens now? Road ahead after pope's resignation | Inquirer News

What happens now? Road ahead after pope’s resignation 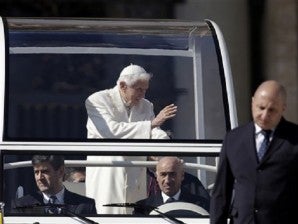 SHADOW POPE? Pope Benedict XVI greets pilgrims at the end of his general audience in St. Peter’s Square at the Vatican, Wednesday, Feb. 27, 2013. Pope Benedict XVI basked in an emotional sendoff Wednesday at his final general audience in St. Peter’s Square. concerns have been aired about potential conflicts arising from the peculiar reality now facing the Catholic Church: having one reigning and one retired Pope. AP PHOTO/GREGORIO BORGIA

VATICAN CITY – Pope Benedict XVI’s historic departure on Thursday sets in motion a timetable of centuries-old traditions after he steps down in a resignation that is unprecedented in modern Catholic history.

Here is what to expect in the coming weeks:

The Catholic Church enters a period known as “Sede Vacante” (Vacant See) starting at 1900 GMT on Thursday during which a senior cardinal takes over interim powers until a new pope is elected.

The cardinal, referred to as the “camerlengo” (“chamberlain”), in this case will be Italy’s Tarcisio Bertone — a powerful prelate whose handling of Church affairs in recent years has been hugely divisive within the Vatican hierarchy.

The camerlengo has traditionally had the role of officially certifying the death of a pope — he once did so by tapping the pontiff’s forehead three times with a special silver hammer and calling out his birth name.

He is also charged with destroying the “Fisherman’s Ring” — a gold signet ring specially cast for each new pope — originally to prevent forgery during the Sede Vacante. Today its destruction in the presence of the cardinals at their first gathering of the Sede Vacante simply symbolises the end of a papacy.

The Vatican post office on Friday will issue stamps for use during the “Sede Vacante”.

Starting on Monday, cardinals from around the world will hold a series of meetings known as “general congregations”.

The roundtables are ostensibly aimed at identifying the priorities for the Roman Catholic Church of the future but they are also a good way of vetting “papabili” — possible candidates for next pope.

Cardinals over 80 cannot vote in the conclave but are allowed to take part in these meetings, which also include meditations.

The cardinals will decide on a date for the conclave, which Benedict has decreed may begin earlier than the traditional timetable of 15 to 20 days after the start of the Sede Vacante, given that no mourning period is needed.

Cardinals will meet in a secret conclave to choose the next pope from among their peers under a system adopted in the 13th century. Conclave literally means “with a key”, reflecting the cardinals’ seclusion without permission to leave until a new pope is found.

All conclaves have been held in the Sistine Chapel — a Renaissance jewel adorned with Michelangelo’s frescoes on its ceiling and walls — since the late 19th century.

The cardinals are sworn to absolute secrecy, under pain of ex-communication, during the voting. Two ballots are held in the morning, and two in the afternoon, until one candidate wins two-thirds of the votes.

At the end of each session, the ballots are burned in a stove by the chapel, releasing smoke above the Apostolic Palace. The smoke is black after each unsuccessful ballot, white once the vote succeeds. The bells of St Peter’s will peal to accompany the white smoke.

The new pope will be led into a tiny sacristy by the Sistine Chapel known as the “sala delle lacrime” or room of tears where he can ponder the immense duty before him.

The dean of the College of Cardinals, currently Cardinal Angelo Sodano, will ask the newly chosen pontiff if he accepts his election, and if the answer is yes, he immediately becomes the bishop of Rome and pope. He also chooses the name he wishes to use, a centuries-old tradition.

The new pope is helped into his vestments (three sets are prepared of different sizes), and one by one the cardinals pay homage to him.

Shortly afterwards he appears on the loggia of St Peter’s Basilica. The senior cardinal deacon, currently Jean-Louis Tauran, will then pronounce the famous phrase in Latin: “Habemus Papam!” (We have a pope!).