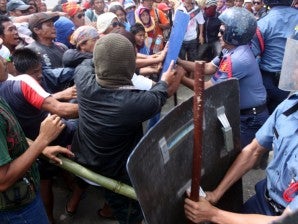 DAVAO CITY, Philippines—Negotiations between survivors of typhoon Pablo and the Department of Social Welfare and Development on the delivery of relief goods ended on Wednesday night, breaking days of tensions and skirmishes between local authorities and the communities.

The two parties agreed to work together in validating the list of relief beneficiaries, to check on those not included but were actually displaced by the typhoon.

The DSWD also agreed to extend the distribution of relief goods until June, not March as earlier announced by the agency.

The protesters were also to be given 100 sacks of rice as they leave for home Wednesday night.

Thousands of protesters marched to the DSWD and camped outside the government premises starting on Monday to press for the delivery of relief goods to typhoon victims, especially the sacks of rice pledged by the DSWD.  Social Welfare Secretary Corazon Soliman, however, said the protesters had refused to give them their own lists of beneficiaries.

The protesters, on the other hand, had expressed fear the list would be used for what they called a DSWD witch-hunt for the leaders of the protesters.