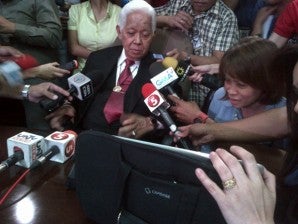 MANILA, Philippines – The Commission on Elections (Comelec) is set to investigate senatorial candidate Ernesto Maceda Jr. for allegedly holding a raffle with a cash prize during a recent campaign rally.

In a video taken by GMA Network Inc and shown to Comelec Chairman Sixto Brillantes Jr. Wednesday, Maceda was seen announcing that he will give away P500 to a lucky winner. He was in a campaign rally with Manila Representative Amado Bagatsing and Ali Atienza.

“Based on initial viewing, there appears to be something wrong,” Brillantes said. “He is holding a raffle and there is money involved.”

“We will investigate to find out the real details and only then can we make a conclusion,” he said. “It could just be a joke or a come-on for people.”

Brillantes said that they will definitely issue a notice to Maceda asking him to explain the incident. “We will follow due process and give him the chance to explain.”

When asked whether Bagatsing and Atienza could also be included in the incident, Brillantes said “everyone there could be included.”

He however clarified that local candidates could not yet be held liable because the campaign for the local elections has not yet officially started.

Senatorial candidate Maria Ana Consuelo “Jamby” Madrigal was also previously made to explain for a contest she held on Facebook with an iPad as a prize.

Brillantes warned other candidates not to engage in other similar gimmicks so as not to create more problems.