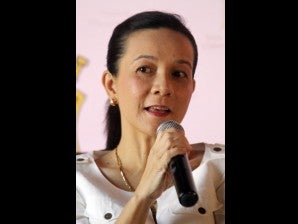 MANILA, Philippines—Grace Poe-Llamanzares’  decision to exclusively campaign with Team PNoy proved to be the right decision as she moved up in the latest Social Weather Station poll, a week after being junked by the opposition United Nationalist Alliance, a spokesperson for the administration coalition said on Tuesday.

Marikina Representative Miro Quimbo also sounded more confident of Team PNoy achieving a 12-0 sweep in the mid-term senatorial elections as nine of its candidates made it to the SWS Magic 12 in February.

“We are elated likewise with the clear trend the survey numbers in the last two months have been showing: A clear trend towards a Team PNoy victory in the 13 May elections,” Quimbo told the Philippine Daily Inquirer.

“While our candidates that were already in the magic 12 have maintained their ratings, those that have newly barged into the the magic 12, Grace Poe and Bam Aquino, are continuing to peak. The thee other candidates within striking distance are likewise peaking at the right time,” he added.

Poe-Llamanzares was a common candidate until the United Nationalist Alliance dropped her and consistent poll topnotchers Senators Loren Legarda and Francis Escudero from the opposition lineup last week.

UNA junked the three after they repeatedly failed to show up in UNA rallies while appearing in those of President Benigno Aquino III’s handpicked candidates.

“She was able to jump from No. 13 in December 2012 to No. 5 today while only campaigning with Team PNoy. We anticipate her to keep improving her numbers over the next few weeks until the elections now that it has even become clearer that she is with Team Pnoy,” Quimbo added.

The latest SWS survey commissioned by Business World shows nine Team PNoy bets in the Top 12. They are Legarda (No. 1), Escudero (No. 2), Sen. Alan Peter Cayetano (No. 3), former Las Pinas Rep. Cynthia Villar (No. 4), Poe and Sen. Aquilino Pimentel III (tied for fifth and sixth), Sen. Antonio Trillanes (No. 8), Aquino (in a tie for ninth and 10th with San Juan Rep. JV Ejercito of UNA) and Aurora Rep. Sonny Angara (in a tie for the 11th and 12th places with former Sen. Juan Miguel Zubiri).

The three UNA bets in the Top 12 are Nancy Binay at No. 7, Ejercito and Zubiri.