2 more claim to be real sultan of Sulu 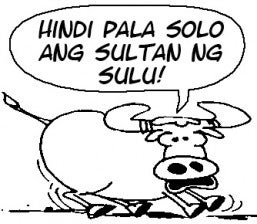 DIGOS CITY—The diplomatic and security crisis created by Jamalul Kiram III’s sending a group of armed followers to Sabah to claim the land has revived an age-old question here: Who is the real sultan of Sulu?

Since the crisis started nearly three weeks ago, two more members of the Kiram clan, both claiming to be the 35th sultan of Sulu, have emerged, airing different views on the standoff in Sabah.

Despite their conflicting claims to the title, which Jamalul insists is his, Fuad Kiram and Muedzul Lail Tan Kiram agree with their cousin that Sabah belongs to the Sulu sultanate.

The sultanate was once one of the most powerful monarchies in the world, with warriors feared for their swordsmanship.

Until the 19th century, the sultanate’s territory stretched from Sulu in southern Philippines to North Borneo in the northern margin of the South Pacific.

But the sun has set on the sultanate, as the colonial powers retreated home with the arrival of modern times.

North Borneo passed on to Malaysia after that country gained independence from Britain, though the Malaysians continued to recognize the Sulu sultanate’s ownership of the territory now known as Sabah.

Malaysia pays a token sum of 5,300 ringgit (P77,000) a year to the Sulu sultanate as lease on Sabah. There are reports in Manila that the paltry amount may be one of the reasons for Jamalul’s sending the “Royal Security Forces to the Sultanate of Sulu and North Borneo” to Sabah on Feb. 9 to occupy the territory.

“Our official policy is the return of Sabah to all of us the nine heirs, including the people,” said Fuad, a son of Sultan Esmail Kiram I (1950-1974) who claims his title is recognized by the council of elders of Sulu.

But unlike Jamalul, he said, he wants the retaking of Sabah done “by peaceful means and by peaceful coexistence with others.”

Muedzul, who claims he is the 35th sultan of Sulu because former President Ferdinand Marcos recognized his father, Sultan Ampun Mohammad Mahakuttah Kiram (1974-1986), said that contrary to being a protector of the people of Sulu, Jamalul put the lives of not only his armed followers but also those of the women and children with them in danger by sending them to Sabah.

If Jamalul had achieved anything with the adventure, it was to make the world know that he was the sultan of Sulu, Muedzul said in a report published by a Malaysian newspaper on Sunday.

“They want to assure the people that they are with the legitimate sultan, but the fact is that they are not, because there is only one sultan of Sulu and that is me,” Muedzul said.

Other Malaysian newspapers quoted Muedzul as saying in a radio interview that Jamalul’s sending armed followers to Sabah was “a decision that would never emanate from a wise man.”

Not a good idea

“He is against the way the situation is being handled, because going into another country’s territory with people [who are] armed, we don’t think it is a good idea,” one Malaysian newspaper quoted Andres Lindholm, Muedzul’s secretary, as saying.

So who’s the real sultan of Sulu?

But it is Jamalul who commands the respect and obedience of the people of Sulu.

And he is the one who has a “royal army” to assert the clan’s claim to Sabah.