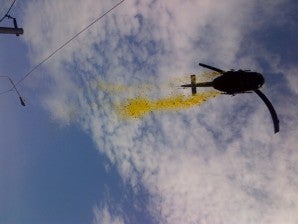 MANILA, Philippines – The sky turned yellow Monday when confetti rained down from the sky as the country celebrates the 27th anniversary of the People Power Revolution.

A helicopter showered the participants of the yearly “Salubungan” with confetti when they reached the People Power Monument in Quezon City around 8:30 a.m.

The participants, which included military, police officials, members of the church, non-government units and other sectors,  shook hands as yellow confetti fell from the sky.