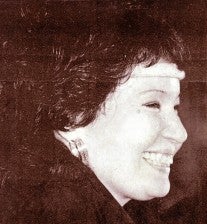 In the twilight of the Marcos regime, a voice was heard across the land.

It was a shrill voice of a girl over the radio, telling the people a catalogue of anomalies occurring during the February 1986 snap election called by President Ferdinand Marcos to validate his 19-year rule.

“It was perhaps because of my voice—that shrill voice that people thought was that of a little girl’s—that people took notice,” media personality June Keithley says in an interview with Gabriel Mercado for the book “Heroes,” recalling her two-week stint as radio broadcaster during the Edsa revolt.

“They might have been wondering, ‘Who is that little girl who is actually telling the truth?’”

She was actually afraid her voice would irritate people listening to the radio.

“But she has a very beautiful soprano,” says colleague Maan Hontiveros. “Remember, she sang in ‘The Sound of Music.’” (Keithley played Maria Von Trapp in the St. Paul College-Manila’s production of the musical directed by Fr. James Reuter when she was 19.)

What really made the difference was that while the male broadcasters then were talking of electoral anomalies in general, this woman was relating in full detail a catalogue of ballot-box-snatching, voter intimidation and disenfranchisement.

And in the national tumult that followed, the girl’s voice rallied radio listeners to help in toppling the dictatorship.

For that crucial role in the Edsa People Power Revolution, Keithley has been awarded the Legion of Honor (the highest government award for a civilian) by President Aquino.

Former President Fidel Ramos, a major participant in the Edsa revolt, used to refer to her as “General Keithley.”

On Monday, at 7 a.m., she will be conferred the Spirit of Edsa Award by

Aquino in a ceremony at the People Power Monument on Edsa and White Plains Avenue, to celebrate the 27th anniversary of the Edsa revolt.

“It is very well deserved,” Hontiveros says. “In fact, it’s long overdue. Her children wish she’d be strong enough to attend the ceremony.”

Keithley was diagnosed with breast cancer in 2009. Her husband, broadcast journalist Angelo Castro Jr., with whom she has a son and two daughters, was later also diagnosed with lung cancer.

“There was even a time when the two were staying in the hospital at the same time, just across the hall,” Hontiveros relates.

With Castro’s death last year, observers say Keithley’s physical condition has further deteriorated. But her faith does not waver. In a TV interview, she said her faith was only strengthened, as she found God’s purpose in everything.

“The last time I saw her was three or four weeks ago at St. Luke’s [Medical Center],” Hontiveros says. “On Valentine’s Day, her children took her for lunch to Mario’s in Quezon City.”

While growing up, Keithley found her being half-American somewhat a disadvantage, so she immersed herself in reading Nick Joaquin’s stories and essays on Filipino culture.

She came to people’s consciousness when she hosted the TV kiddie shows “Lollipop Party” and “The Children’s Hour,” and the society talk show “June and Johnny.”

When she appeared in Lino Brocka’s twilight mosaic “Lunes, Martes … ,” disbelieving viewers were surprised to find that she could act, delivering arguably the most poignant piece of acting in that all-star ensemble.

“Her root was in theater, but she made her name in TV,” Hontiveros says. “We used to run across each other at Repertory Philippines.”

The two first met in 1968, when Keithley was going to the United States for further studies and Hontiveros had to replace her as host of TV 5’s “Lollipop Party.”

When the 1983 Ninoy Aquino assassination galvanized the nation and fueled the fight against Marcos, Keithley was still apolitical, noncommittal.

In the Mercado interview, she says people must have seen her then as just someone who was sosyal. Being perceived as “too flighty, or even wersh-wersh,” she thinks she might not have been taken seriously to get involved in fighting martial law.

“I thought of myself as an artist at that time,” she reveals. “As an artist, I shunned all political affiliations. There had to be no boundaries or restrictions to my art.”

Epiphany came in late 1985. Invited to lead the prayer at Rizal Park’s Quirino Grandstand for the consecration of the nation to the Blessed Virgin Mary, her 10-year-old son Diego asked her to go with him. No longer a churchgoer at that time, she was foot-dragging, until she conceded.

At home that night, she couldn’t keep from crying, and on night after night thence. She realized it was the reawakening of her faith—which eventually led her on several religious pilgrimages, causing not a few to scoff that she had become a fanatic.

When the snap presidential election came, she contacted Fr. James Reuter and asked how she could be useful. He assigned her to broadcast over Radio Veritas.

Keithley’s name has since been associated with that radio station. Many do not know she stayed there for only about two weeks and was even declared persona non grata there.

The management was nervous with her aggressive broadcasting style, and she reportedly had had shouting matches with the bishop manning the station.

She later approached dzRH but was refused at the last minute. At the peak of Edsa I, the little girl’s voice was heard again over dzRJ (masquerading as Radyo Bandido).

Before starting that historic 14-hour broadcast, Keithley put “Mambo Magsaysay” on air, then ruminated over her fate in case Marcos’ military men barge in and arrest her and her two assistants, the prepubescent kids Gabe and Paolo Mercado.

She recalls: “As I sat before the console, I remember thinking, ‘When the men come, will they torture me? Will they do to me what they did to Nelia [Sancho] or Maita [Gomez]? Will they put me on a block of ice and laugh at all my cellulite? Will they rip my fingernails off and discover that I have layers of false fingernails? Will that make them even more angry?’”

She said a little prayer, and with that the revolution began.